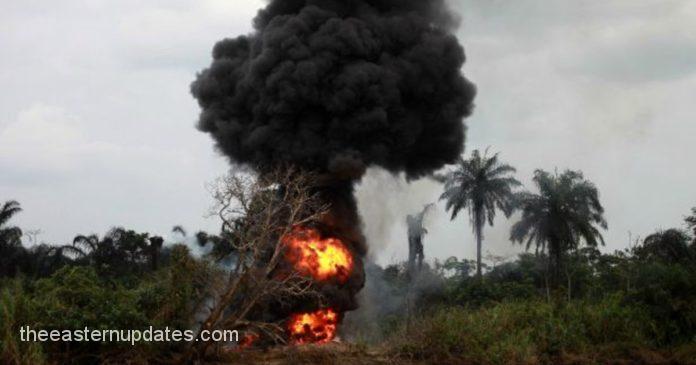 It has been reported that no fewer than six persons have been reportedly killed in a recent gas explosion which had taken place in Owaza, Ukwa West Local Government Area of Abia State.

It had been learnt that the incident had occurred around 9:50 am when the victims were reportedly engaged in illegal oil refining (oil bunkering) at a site which was situated in Owaza.

They were said to have used a gas cylinder to disconnect an oil pot which had also exploded in the process and killed the six on the spot. However, a source from the area had also claimed that the deceased were not involved in illegal oil refining.

Ekele Chukwu had also revealed that when the military dislodged oil bunkers in the area sometime ago, a man from a community in Rivers State, which shares a boundary with Owaza, was among the oil bunkers, dismantled his oil pots and parked them in a compound at Owaza

Chukwu said, on Sunday, the man whose identity could not be immediately ascertained, contracted a wielder to dismembered the pots so he could put them to other uses.

The source said it was in the process of dismembering the oil pots that the gas cylinder they were using exploded, killing four people instantly and seriously injuring two others.

“The victims were not involved in oil bunkering as have been erroneously reported in some quarters.

”The truth remains that a man from a community in Rivers state, which shares boundary with Owaza, was among those involved in oil bunkering who were dislodged by the military sometime ago.

“He packed his oil pots in a compound in Owaza and, on Sunday morning, he came with a wielder to dismember the pots, probably, he wanted them for other purposes. It was in the process of dismembering the pots that the gas cylinder exploded, killing four people instantly, including the owner of the pots, and injuring two others,” he said.

There are fears that the two people injured in the explosion may have also died in hospital because of the severity of their wounds.