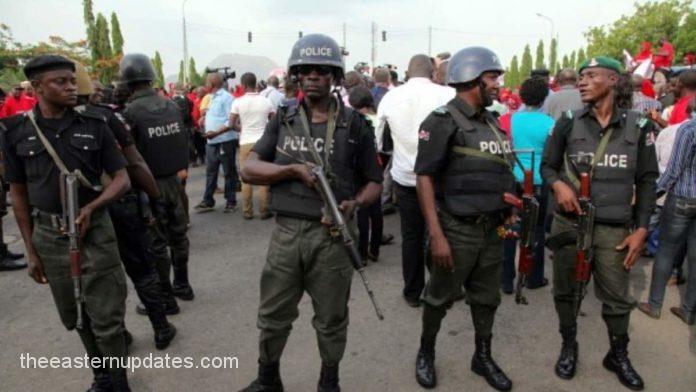 The police command in Imo State have confirmed the arrest of no fewer than six suspected members of the Eastern Security Network (ESN) in Obudi Agwa, Oguta local government area of the state.

The state commissioner of police, Mohammed Barde, said one of the suspects was dressed in a police operational vest suspected to be owned by one of the officers killed in an attack in Agwa.

This was made known through a release made available to LEADERSHIP Sunday which was signed by the police public relations officer, Michael Abattam.

“Following a distress call on 10/8/2022 at about 10:40 hours that some of the bandits that escaped arrest during the Izombe and Agwa raid conducted by the command’s tactical teams, were sighted to have regrouped, blocking the road along Obudi Agwa, stopping vehicles, searching the occupants and checking their phones to identify policemen in the vehicle for possible abduction, the command’s tactical teams immediately mobilised, joined by police operatives from Agwa police station, stormed the identified location at Obudi Agwa road and arrested six bandits namely; Mmadukaji Moses ‘m’ aged 30 years of Mgbala Agwa; Chigozie Amanyere of Umukpo Agwa; Ifeanyi Uche ‘m’ aged 21 years of Obudi Agwa; Uzoma Uche ‘m’ aged 24 years of Obudi Agwa; Sopuruchi Anumodu ‘m’ aged 24 years and Chukwuma ‘m’ aged 30 years. “

The commissioner said the operatives disarmed the bandits and recovered their weapons, including one English-made automatic pump action gun, two locally made pistols, 20 live cartridges and 14 machetes.

The police stated that in the course of interrogating the suspects, it was discovered that they were all natives of Agwa while the suspect who was putting on police operational vest, was undergoing further interrogation to confirm the source of the vest, stressing that they would be charged to court as soon as investigation is concluded.