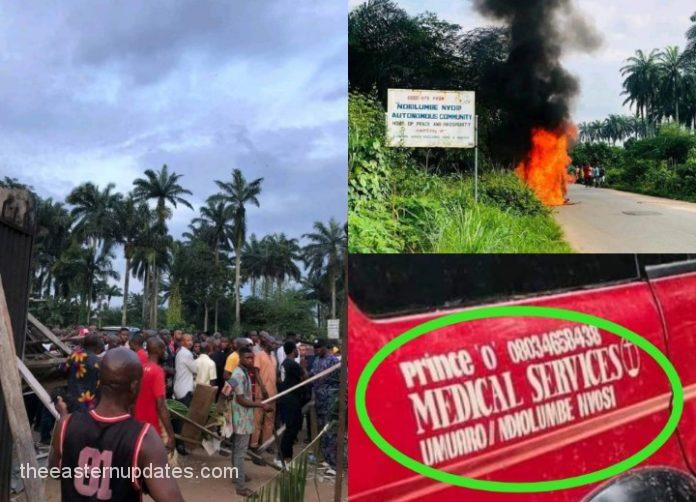 Some of the youths of Ndiolumbe in Isiala Ngwa South local government area of Abia State who had formed an irate mob had reportedly burnt down a mortuary located in their community.

It was gathered the youths set ablaze the facility over speculations the owner of the mortuary engages in alleged harvest and sale of organs of corpses deposited at the morgue.

In another report, youths from Abia and other parts of the South East on Tuesday trooped out en-masse in Aba, the state commercial capital to protest the killing of innocent indigenes of the zone by the Ebubeagu Security Network (ESN).

The Eastern Updates reports that the protest was coming on the heels of an alleged recent killings of indigenes of Imo and Ebonyi states by the operatives of Ebubeagu.

The protesters gathered under the aegis of Igbo youths and said to be numbering over 400, marched through Umule, Faulks, Aba-Owerri, and among other major roads in Aba, causing gridlock on some of the major roads and carrying placards with various inscriptions.

The protesters chanting different solidarity songs as they called for the disbandment of the security outfit.

According to them, it has become imperative that governors of the South East ban the operation of the ESN in their various states due to the numerous bloodshed recorded in the zone as a result of the activities of the security network.

The protesting youths also frowned at the activities of armed herdsmen in Abia State who according to them have been kidnapping innocent citizens at will and forcing them to part with huge sum as ransom.

It was gathered that the protesters were dispatched with teargas by a combined police team from the Aba Area Command and some of the special units from the Abia State Command.