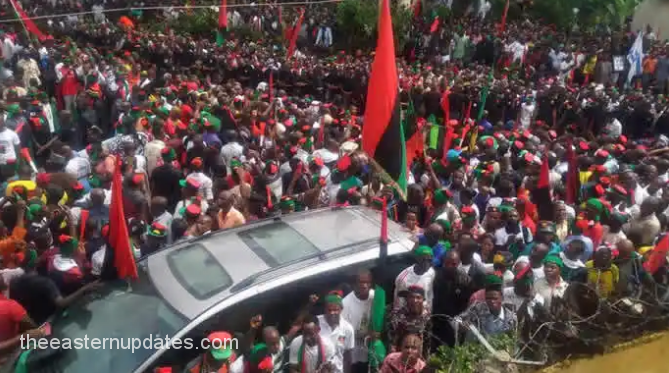 The Indigenous People of Biafra (IPOB), has described as laughable, disgraceful and unguarded the statement credited to the Northern Coalition Group (NCG) on the United Nations Working Group on Human Rights and Arbitrary Detention’s recent demand for the unconditional release of its leader, Nnamdi Kanu.

IPOB, which stated this on Sunday in a statement signed by its Media and Publicity Secretary, Emma Powerful, said that NCG is a faceless Northern group that only displayed its idiocy and absolute ignorance in the attack and warning to the United Nations’ arm.

The Eastern Updates recalls that the CNG had on Friday in Abuja at a press conference rejected the call by the UN for the unconditional release of the IPOB leader, Kanu, accusing the world body of bias in its disposition towards certain regions of the country

In its response, IPOB noted that the NCG statement showed how undemocratic and lawless the members are.

‘It is not far from the truth that the … government in Nigeria sponsored this faceless Northern group to attack the UN decisions. They want to test the reactions of the international community.

‘The world must understand that Fulani people are parasites in Nigeria who are bent on hijacking indigenous people’s ancestral lands and resources in Nigeria, but IPOB won’t allow them. They have hijacked strategic positions in Nigerian government, have deliberately and tactically weakened the Nigeria military while empowering the Fulani terrorists to take over Nigerian government structure and then seize the ancestral lands of all the indigenous people.

IPOB said that the statement by the Northern group attacking the United Nations showed that the members of the group are demented and do not know that ‘the United Nation’s opinion is not the same as the Nigeria court orders they flout at will,’ adding that ‘attacking United Nations’ opinion shows how clueless, uninformed and inconsequential they are.’

The pro-Biafra group pointed out that the United Nations is the final arbiter in the world, saying that no ranting and undemocratic nature can change the decision of the UN.