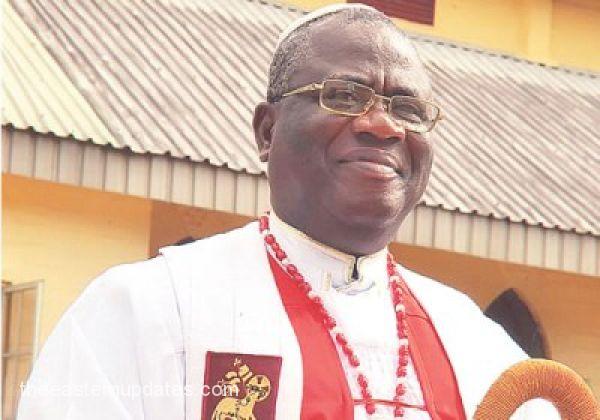 The Prelate of the Methodist Church, Nigeria, His Eminence, Samuel Kanu-Uche, has called the federal government to handle the case of the leader of Indigenous People of Biafra (IPOB), Nnamdi Kanu with wisdom and caution.

The United Nations Human Rights Council Working Group on Arbitrary Detention has in a report it released late last week, indicted both Nigeria and Kenya Governments for the arrest and extraordinary rendition, torture, and continued detention of Kanu without due process.

The UN asked Nigerian Government to, ‘immediately release Kanu unconditionally’ and pay him adequate compensation for the arbitrary violation of his fundamental human rights.

The Prelate stated this in Umuahia, Abia State during his farewell visit to the state, said every family has a stubborn child and no one will because of that throw the child away.

Dr. Uche said Nigeria at present needs peace and that if the case of Kanu was handled with wisdom, it would not only bring the needed peace but will bring development to the country.

Dr. Uche urged Nigerians to vote for only candidates with credibility and the ability to fix Nigeria, not for political parties.

Read also: Jarigbe harps on need to establish college of agriculture in Ogoja

He condemned the recent appearance of alleged fake Bishops at the unveiling of Senator Kashim Shetima as the running mate of Asiwaju Bola Tinubu at Abuja.

The Prelate who recalled his 46 years in the vineyard of God, noted that he has spent nine years as the Methodist Prelate, during which he superintended the planting of 252 new churches. He added that within the period, the church recorded rapid infrastructural development.

He expressed appreciation to leaders and members of the Church for their support for him, promising that a smooth transition of leadership in the Methodist Church would take place under his supervision.

Facebook
Twitter
WhatsApp
Email
Telegram
Previous article2023: I’m In The Presidential Race To Win, Obi Insists
Next articleWhy I Made A Case For The Release Of Kanu, Igboho – Ortom