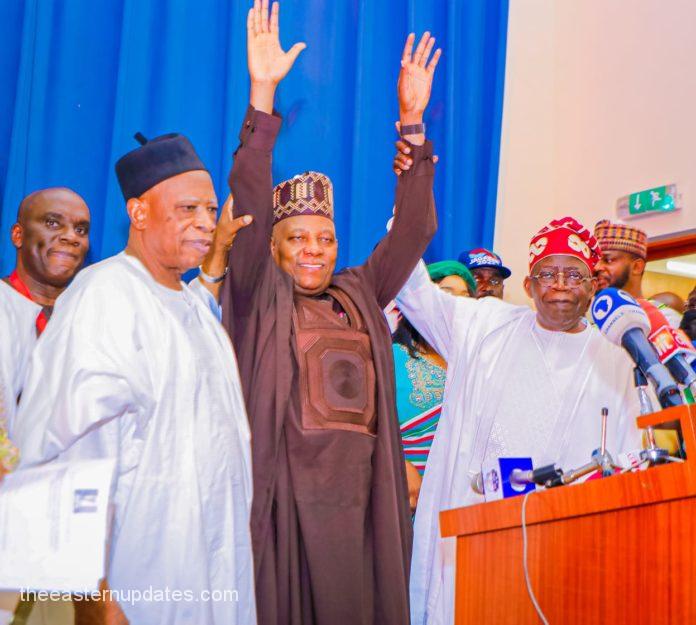 On Wednesday, Governors, aspirants, and delegates of the South-East extraction were surprisingly missing at the presentation of the Vice Presidential Candidate of the All Progressives Congress (APC), Senator Kashim Shettima.

The Eastern Updates reprost that Shettima’s unveiling took place at Shehu Musa Yar’Adua Centre in Abuja, amid the presence of heavy security operatives.

In attendance were party chieftains, members of the National Working Committee, and leadership of the APC led by Senator Abdullahi Adamu and National Secretary, Iyiola Omisore.

However, the absence of South East political leaders and governors got many wondering whether it was a coincidence.

In his address, Presidential flag bearer of the APC, Asiwaju Tinubu, told Nigerians that he was delighted to showcase Shettima who shared the same ideology as him and will guarantee the party electoral victory in the 2023 election.

He said, ‘I stand ready to make this journey and, today, I am delighted to stand shoulder to shoulder with my good friend, brother and running mate; His Excellency, Senator Kashim Shettima.

‘Much has been said and written about my decision to select Senator Shettima to partner me on this journey. As a committed democrat and progressive, I have read and listened to all that has been written and said. It has been an emotional and moving period. I understand the strength of feeling that has been displayed by some within our party and I cherish and respect the views of all.’

The colourful unveiling ceremony was almost marred by a protest at the party secretariat, which took place almost at the same time the event was held on Wednesday.

Meanwhile, hundreds of demonstrators on Wednesday morning stormed the national secretariat of the All Progressives Congress to register their grievance over the position of the party on the contentious Muslim-Muslim ticket.