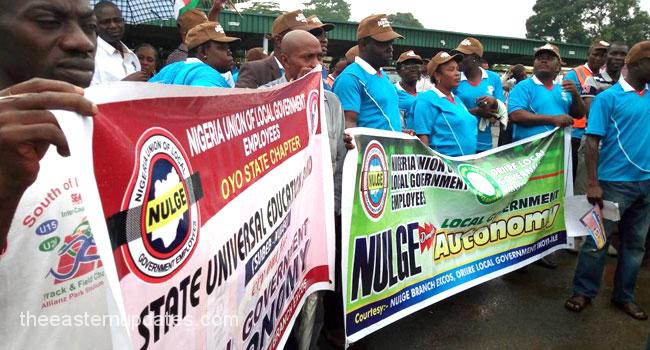 Some of the Local Government workers in Enugu State have vowed to down tools and go on an indefinite strike if the Enugu State government fails to implement the minimum wage and consequential adjustment of their salaries and levies latest by Wednesday, July 27, 2022.

The workers had noted that the findings and recommendations of the committees set up by the government showed that the local government areas had the capacity to pay the minimum wage, urging Governor Ifeanyi Ugwuanyi to prevail on the chairmen to do the needful.

The Enugu State President of NULGE, Comrade Kenneth Ugwueze and the State Chairman of NUT, Comrade Theophilus Odo had announced that they had waited for over 30 months but nothing had come out of negotiations with the Government. While providing a background to the problem, they recalled that the Enugu State Government approved minimum wage over 30 months ago, but local government workers had been left behind.

The teachers had embarked on strike for one month, which was suspended on June 7 after the Government promised to begin the implementation.

However, the NUT chairman said, regrettably, “we are here to alert the Government that we are not happy. It has never happened that minimum wage is paid to some and denied some.

“We went on a strike but the Government pleaded that we suspend it. We did so on the 7th of last month, today, six weeks or thereabout, nothing has happened.

“Series of committees have even been set up, they brought out recommendations which were never implemented.

“Based on that, the primary school teachers in Enugu State have resolved that after Wednesday, the 27th of July, if the minimum wage was not implemented, all primary schools must shut down in the State.”

Similar, the NULGE President told journalists that “since January 2020, local government workers have yearned to receive the minimum wage, we have adopted all measures for dialogue, to no avail.

“We are now on the fourth Committee but. What troubles us most is that the minimum wage is an act of the National Assembly to occasion hyper inflation in the country

“In Enugu, the State Government approved this payment. But this is the first time in the history of Enugu State that there is salary disparity. Those under the State payroll are enjoying the minimum wage but those of us at the local government are left behind.

“We go to the same market, enter same buses, including hospitals.

“Considering the hyper inflation how can we survive when some people are receiving N18,000. What we are asking is for workers to get the N30,000 and the consequential adjustment

“So, we had our SEC meeting today and we have resolved that if by the end of Wednesday, being 27th July, and they have not shown any commitment towards paying the minimum wage, we are going to withdraw our services, this shall include all the primary healthcare centres.”

Meanwhile, a joint communique issued by the workers after their meeting, reads in part, “The leadership of the Nigeria Union of Teachers (NUT), Enugu State Wing and that of the Nigeria Union of Local Government Employees (NULGE), Enugu State Chapter, do hereby wish to alert their teeming members and indeed all well-meaning citizens of Enugu State of a likely total shut down of all the Public Primary Schools, as well as the entire Local government system in the State following the persistent refusal of the Local Government Council to implement the N30,000 National Minimum Wage with its Consequential adjustment for workers in the two
aforementioned sectors since February, 2020 when the implementation commenced in Enugu State (30 months down the line).

“That notwithstanding series of meetings with relevant authorities, reports of committees, consultations, appeals, a subsisting court judgment and the likes, all efforts by the two
industrial unions to convince the Local Government Councils to commence the payment proved abortive.

“Accordingly, the two affected industrial unions in the State (NUT and NULGE) wish to state unequivocally that if by Wednesday, 27th July, 2022, the National Minimum Wage of N30,000 with its consequential adjustment is not implemented and seen to be implemented for workers in those two unions, industrial peace and harmony may not be guaranteed in the two sectors in Enugu State.”