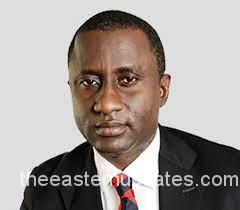 An appeal filled by a governorship aspirant of the All Progressives Congress (APC) in Abia State, Uche Ogah, against the party’s candidate, Ikechi Emenike was on Tuesday dismissed by the Court of Appeal sitting in Owerri.

The court further restrained INEC from accepting or publishing the name of any other person as the candidate of APC in the said election other than Emenike’s.

The appellate court in its ruling on Tuesday, dismissed the motion for leave to appeal as an interested party in the judgement of an Abia State High Court which favoured Emenike’s nomination as the governorship candidate of the APC.

Ogah, who was not a party in the suit leading to the judgement, also filed a main appeal challenging the high court’s verdict upholding Emenike’s contention that the party could not withhold his name as the APC candidate having emerged in the primary election conducted by the party on June 26, 2022.

Emenike and the APC had opposed the motion on the grounds that the Court of Appeal lacks the jurisdiction to hear and determine it having been filed outside the 14 days stipulated in Section 285 (11) of the Nigerian constitution.

Emenike had at the high court moved the court to also compel INEC to accept his name as uploaded and publish same as the candidate of APC for the 2023 governorship election in Abia State in 2023.

Similarly, a Federal High Court in Ebonyi has again declared the rescheduled PDP primaries in the state invalid and insisted Dr Ifeanyi-Chukwuma Odii remains the authentic governorship candidate of the party for the 2023 poll.

The ruling came after an appeal court in Abuja ordered the court of first instance (federal high court, Abakaliki) re-trial of the matter and allowed Senator Obinna Ogba to be joined in the early suit which declared Dr. Odii as the governorship candidate of the party in the state.

The Eastern Updates recalls that the party rescheduled and conducted a fresh primary on June 4 and 5 which produced Sen.Ogba as the winner while Dr. Odii was on May 28 and 29 elected as the party’s candidate.