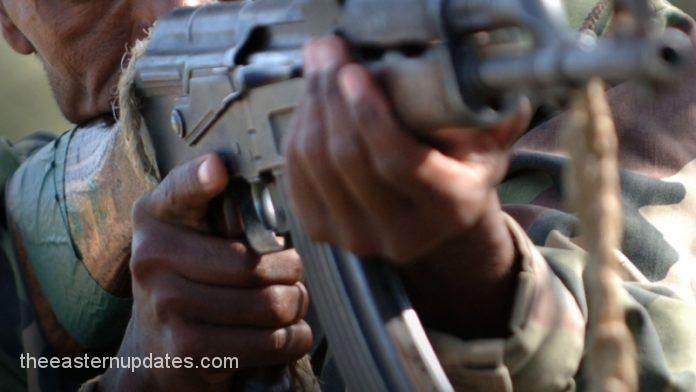 Some unknown gunmen in the early hours of Saturday have abducted a top official of the Niger Delta Development Commission, NDDC, Kingsley Okorafor close to his residence in Umuadara Umulogho autonomous community in Obowo local government area of Imo state.

Eze Patrick Uwalaka, the Traditional Monarch of the community  confirmed the incident to newsmen in Owerri.

The Eastern Updates had gathered that Okorafor was abducted while he was returning home from the vigil of the Traditional Ruler of Ndihu autonomous community in Obowo LGA late Eze Innocent Anyawu on Friday night, whose burial is slated for Saturday, July 16 2022.

He was said to have been trailed by the kidnappers from the vigil to his home and he was abducted and his car abandoned.

In another report, some frightened eyewitnesses have finally opened up about how a crack team of anti-robbery police squad officials from the Abia State Command worked hard to foil an attempt to rob a branch of an old-generation bank in Umuahia after a fierce gun battle with the daredevil robbers.

The operation was reportedly carried out by a four-member gang, according to the eyewitnesses. It was learnt that the armed robbers, on sighting the policemen, began to shoot sporadically as they made attempt to escape.

They were said to have abandoned their red-colour Corolla car, with Reg. No: LND 126 HL, and escaped in another car which had been snatched from an unsuspecting motorist due to pressure from the policemen.
One of the eyewitnesses, Yusuf Garba, a cosmetics dealer on Okpara Avenue said the operation happened at a time he was still displaying his wares between 9 am and 10 am.

Garba, who spoke to Newsmen said that the incident caused a serious stampede residents and traders in the area, including passersby, “ran helter skelter” for their lives.

Another eyewitness and a dairy seller in the area, Mr Iheanacho Agubuche, identified one of his co-dairy seller and a passersby as those hit by stray bullets.
Agubuche said that the victims were immediately rushed to the nearby Federal Medical Centre for medical attention.

“We are praying that they would survive from the bullet wounds,” he said.