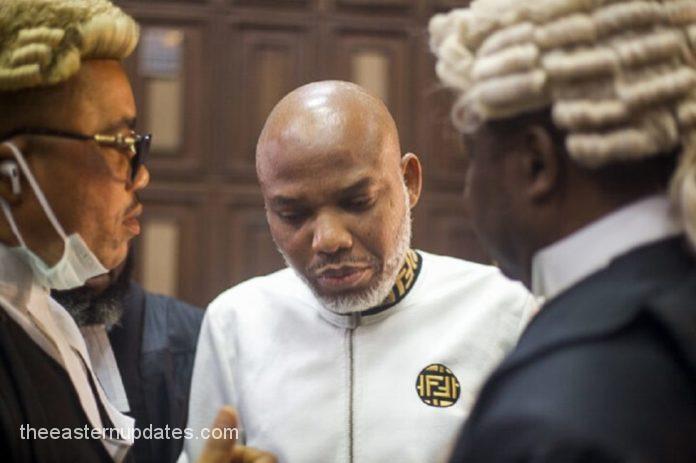 The proscribed Indigenous People of Biafra, IPOB group has on Saturday, accused the Department of State Services, DSS, of placing some more strict measure on its leader, Nnamdi Kanu in detention to further frustate his stay in their detention.

The IPOB had also revealed that the DSS has refused to allow Mazi Nnamdi Kanu to spend the approved time with his visitors.

Spokesman of IPOB, Emma Powerful, had revealed that the DSS has restricted Nnamdi Kanu’s time to receive visitors from two hours to 30 minutes.

In a statement which he had he signed, Powerful had also accused the DSS of flouting court orders that allowed Kanu to receive visitors for two hours.

Powerful had wondered how Kanu would interact with his lawyers for 30 minutes during permitted visiting days.

He accused the secret police of torturing Kanu psychologically.

The statement reads partly: “We the global movement and family of the Indigenous People of Biafra (IPOB) ably led by our great leader Mazi Nnamdi Kanu wish to reiterate our displeasure once again over the deliberate, permanent and insidious psychological torture being committed against our leader, Mazi Nnamdi Kanu in contravention of UNHRC and all other International Human Rights laws and principles in DSS confinement and torture facilities.

“The DSS agents have continued to flout and violate the existing court orders strictly given by justice Binta Nyako concerning the welfare of Kanu, IPOB leader (High profile prisoner of conscience).

“The global community should take note of the atrocities being perpetrated against our leader Mazi Nnamdi Kanu by the Nigeria Government and their lawless DSS.

“Kanu is being tortured in DSS dungeon because he spends four days in Solitary confinement and allowed only 30minutes to relate with humans on Mondays and Thursdays. As against the subsisting Court Order that allowed Kanu to stay up to 2 hours with his visitors, DSS no longer allows his visitors to stay with him longer than 30 minutes on each visiting day.

“How do DSS want Kanu’s lawyers to interact with their clients for 30 minutes over ongoing cases? As in the tradition of this Fulani Government and their lawless DSS, the Court approved time has been illegally changed in breach of the Court Order without due process. This flagrant abuse of Court Orders and dehumanization of our Leader is not acceptable and must be stopped going forward.”