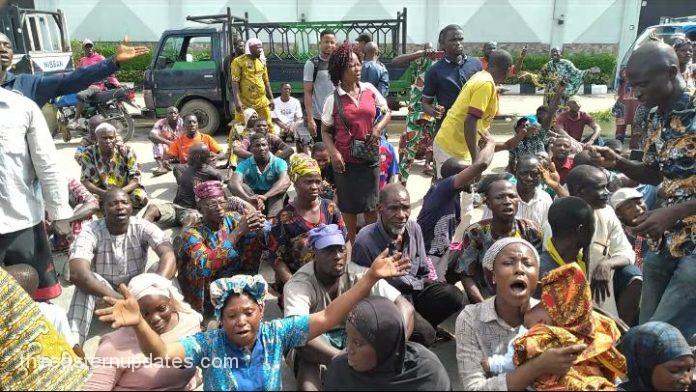 Traders at some of the major markets in Anambra State, particularly Eke Awka market in Awka South Local Government Area have vented their frustrations while openly lamenting on the new tax regime which the governor, Prof. Chukwuma Soludo has slammed on them.

The traders also massively lamented about the rationale behind why they are being forced to pay multiple taxes and levies on a daily basis in the market.

It had also been gathered that most of the shop owners in the markets were being taxed as much as  ₦14,200 while the hawkers were randomly forced to pay  ₦200 at various times and places every day. A breakdown of some of the levies includes stallage fee of  ₦4,800, market development fee of  ₦2,400, market traders fee of  ₦3,000, pollution/sanitation fee of  ₦,000, biometric market registration of  ₦700.00, and market operation fee of  ₦1,300.00.

Governor Charles Soludo had, during a meeting with parks and market executives in the state, disclosed the introduction of a new tax regime in the market.

He had also noted that the move became imperative as the era of revenue generation through the sale of crude oil was gradually phasing out. The traders were said to have been informed of the new development last week Thursday and were told to pay up between Tuesday to Friday.

Speaking to journalists in Awka on Wednesday, a former chairman of Eke Awka Market, Emeka Onyemaechi, said the state government had banned all cash payments of revenue since July 1.

Onyemaechi added that, to their surprise, people claiming to be government officials have been invading the market and demanding cash payment without any information from the government.

He said, “Last week Thursday, I was inside my shop when some people, claiming to be government revenue officials announced that we should pay N14,200 for our stallage and other fees from Tuesday.

“On Friday, I went to the Anambra State Board of Internal Revenue to find out the true position and the information I got was that on Tuesday, they would be coming to capture all shops in the market and everybody will pay N2,000 for the capturing, and after that, the government will give the account details where traders will pay their fees.

“Unfortunately, on Tuesday, that was a holiday, they started the capturing and collection of the  ₦14,200. They forced people to the market, where over 20 Point of Sale terminals were stationed, and people without cash were asked to use their debit cards to pay. After that, I called the revenue office again and complained, they said we should pay.”