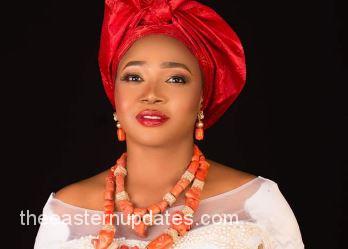 The Ebonyi South senatorial district candidate of All Progressives Grand Alliance (APGA) for the 2023 general election, Blessing Egbedi who is the only female competitor has withdrawn from the contest today.

In a statement which she had made in Abakaliki, the female politician said she took the decision following critical political developments in her party.

Egbe, who emphasised the need to ensure victory of APGA during the elections, however, said she was optimistic of contesting another position under the party.

“I write to officially inform you all; my reverenced supporters and support groups cutting across the length and breadth of Onicha-Igboeze in particular and the entire Ebonyi South senatorial zone in general about the necessary changes in the political equations and calculations in our party- APGA, leading to the scheduled primary elections meant for substitutions of some candidates in some parts of our state.

“As we all know, politics is about balancing the power equation to accommodate other parts of the state and ensure victory for a political party desirous of triumph. This is at the heart of the key changes ongoing in our party and it is all for our own benefit and, indeed, that of the state as we approach the ballot in the 2023 general election.

“To this end, therefore, I wish to intimate my supporters of my official withdrawal as the senatorial candidate of our party for the Ebonyi South in the 2023 general election. I sincerely appreciate your supports and commitments to my project since we took off in May.

“Of course, it needs re-emphasising that my desire to contest for an elective position was first fuelled by my passion to see my people have better conditions of living through provision for good education, quality healthcare, hygienic drinking water and creation of opportunities for our hardworking youths to work and thrive in their various endeavours rather than become willing tools in the hands of the same old politicians that have impoverished them for their selfish interests.

“Therefore, I have decided to contest a political position that would afford me a better opportunity to be closer to my people. A journey of a thousand miles starts with a step and that step we have taken. More information and actions geared towards the realisation of this noble pursuit which will be for the overall best interest of Ndi Onicha and OHANIVO in general would be duly communicated to our supporters and support groups in the days ahead,” she said in the statement.

However, sources close to the politician said she had been compensated with the Onicha West state constituency ticket of the party.