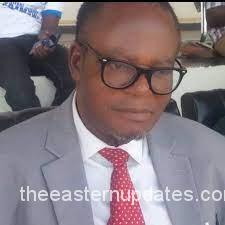 Fresh reports reaching the desk of The Eastern Updates has revealed that Imo State has lost another of its illustrious sons in the person of Chief Amos Agwamba who had been a Fifa-badged, Nigerian officiating referee and academic luminary.

Amos Agwamba’s death comes three months after his colleague, Festus Okubule was reported to have kicked the bucket.

Alloy Chukwuemeka, a prominent Nigerian football administrator had confirmed to The Eastern Updates today that Amos Agwamba had passed away on Tuesday.

“We chatted 4 days ago when he requested for the NPFL match day 36 Fixtures.”

:”It is so unfortunate that he has left us behind”

“A Seasoned Sports Administrator per Excellence @ Fed poly Nekede Owerri. May his soul rest in peace,” Chukwuemeka wrote on his known Facebook page on Thursday.

“It was with sadness and rude shock that I received the news of the sudden demise of Sir Dr Amos Agwamba which occurred in the late hours (night) of Tuesday July 5th.

“Sir Dr Amos Agwamba until his death was the Chief of 19th OCBC connected with All Saints Anglican Church Umuguma. He was a nice gentleman.

“It is even more saddening recalling how the Late Sir Dr Amos Agwamba in collaboration with Lay Canon Hon. Sir Oguike ensured the success of the maiden enrolment of The Brigade Company few months ago.”

“He has fought the good fight and stood firm in the faith.

“On behalf of The Boys Brigade Imo State Council, I sincerely commiserate with his dear son and pioneer Captain of 19th OCBC, Mr Nnaemeka Agwamba over the death. I earnestly pray God to grant his soul eternal rest and give his family the fortitude to bear the irreparable loss.