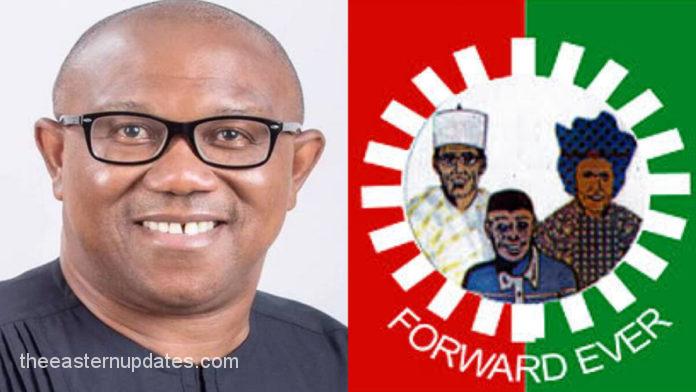 A former Deputy National Chairman of the Labour Party, Calistus Okafor has revealed that so far, he has spent ₦48 million in his case challenging the legality of the Julius Abure-led National Working Committee (NWC) of the party in Court declaring that Peter Obi’s claim of being the presidential candidate, was still contentious.

He made this revelation while reiterating the readiness of his faction’s NWC to open discussions with Obi if the latter so desired.

The Eastern Updates recalls that Obi had emerged as the candidate of the Julius Abure-led faction of the LP.

Okafor who stated this in an interview with reporters yesterday said having sold his house in Gwarinpa, he was ready to sell another house in Wuse 2 to continue fighting.

He said, ‘I have read in the news media where Dr. Doyin Okupe was quoted to have said that I was demanding for N48m for the lawyers who have been representing me in court before I would withdraw my case against the Labour Party.

‘I am however happy that he did not say that I have collected the said amount from anybody or group of people. I have also read the mischievous claim of a group that I had collected ₦15m draft to withdraw the case I instituted against the Labour Party. This is also not correct.

‘I have not been bought over by anyone. I want to let Nigerians especially the Igbo people know that I did not go to court because of Peter Obi. I instituted my case in court on December 21 2021 and 0bi joined the Labour Party on May 29.

‘I was in court in January, February, March and April. It was after Obi joined in May that people started saying that I had been bought.

‘Obi is an Igbo man like me. He has never offended me. I have no reason to fight him.

“When the supporters of Obi came to me and demanded settlement. I asked where we would start from? I asked them whether it’s about the N48m I had spent on the case so far that they want to pay.

‘On June 30, I went to court with my lawyers including SANs. I have sold my house in Gwarinpa. I am ready to sell another house in Wuse 2 to continue fighting.

‘If anyone thinks that anybody is sponsoring me, let that person have it in mind that when I started this battle, I did not see Obi in the picture.

‘If Obi thinks he can come to the Labour Party and carry out injustice against me, like the way he was treated in the PDP, he is making a great mistake.

‘If anyone also believes that I have collected money from Peter Obi, the person is making a mistake because I’m in court. I have no hard feelings against anybody and I will not allow anyone to intimidate me with SANS.

‘My case is coming up again on July 8. I have brought in two SANs. I know that there are people benefiting from the current situation who are making Peter Obi not to see the reality of life. They didn’t allow him to come into reality that he has no ticket with which to contest next year’s election yet.

‘There are people telling Obi not to mind me thinking that my case had no merit. He (Obi) is paying lawyers, hundreds of millions instead of him to resolve the crisis in the Labour Party.

‘This is a man who wants to change the narratives politically, who wants to do something differently but he could not settle the crisis he met on the ground. He cannot resolve the Labour party crisis and he want to resolve the problem of Nigeria.

‘If anyone wants to crucify me for fighting for my right, I’m also prepared to fight on, even to the logical end.

‘This issue of Igbo man fighting another Igbo man is not correct. Nobody is sponsoring me. Instead of resolving the issue in the LP, Obi is spending millions of naira to hire senior advocates of Nigeria to intimidate me in court, he believes that his money would get him what he wants but we shall see the outcome at the end of the day.’

Okafor insisted that he had nothing against the person of Peter Obi, but maintained that the former governor was in the faction of the party whose leadership was allegedly not recognised by the LP’s constitution.

He maintained that the constitution of the party recognises him as the acting national chairman of the LP following the sacking of its late chairman, Abdulkadir Abdulsalam.