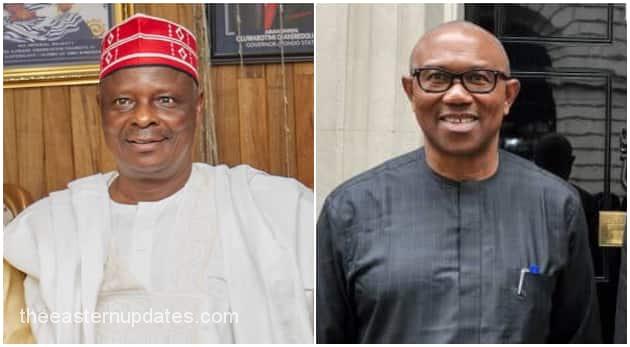 The Peter Obi Support Network has demanded that the talks and alliance between the Labour Party and the New Nigerian Peoples Party end immediately.

The group asserted that Rabiu Kwankwanso, the NNPP’s presidential candidate, will lose rather than gain from his continued support for Peter Obi’s campaign.

They said Kwakwanso’s utterances and those of his aides as well as key supporters have continued to raise eyebrows among patriotic Nigerians who are driving the Peter Obi electoral revolution out of their conviction on his competence and unquestionable patriotism.

In the statement, titled, ‘Why Labour Party must immediately discontinue any alliance negotiations with Kwankwaso’, the group said the former Kano State governor is not ideologically inclined to Obi or the Labour Party, especially, on the key issues driving the former Anambra governor’s aspiration to the presidency.

It said, ‘It has therefore become pertinent to advise the leadership of the LP to immediately call off any discussions with the NNPP, on the issue of forming an alliance between them.

‘The NNPP and her candidate have consistently displayed a most unfortunate insensitivity to the aspirations and desires of long-suffering Nigerians for a working, united and equitable Nigeria and have show themselves as being incapable and unready to support or participate in the process of electing a President that will make this happen in 2023.’

It added that an in-depth analysis of Kwankwaso’s utterances and arguments on TV programmes gives the disturbing impression that he might be aiming to be an ethnic inspired candidate, rather than a New Nigeria patriot and advocate which the Obi campaign is hinged on.

The statement read in part, ‘Following his recent outing on Politics Today aired on Channels Television, all doubts have been erased that the presidential candidate of the fledgling NNPP, Dr. Rabiu Kwankwanso, is not ideologically inclined to Mr Peter Obi or the Labour Party, especially on the key issues driving the former Anambra governor’s aspiration to the presidency.

‘His Excellency Dr. Rabiu Musa Kwankwanso has regrettably manifested a most distasteful understanding of the Nigerian situation, as he advertised himself as primarily hinging his aspiration to the presidency on the basis of where he comes from rather than where he wants to take Nigeria to, by arguing that his candidacy is propelled by the North rather than by Nigerians and also emphasising on our ethnic differences rather than blunting them.

‘We should understand that Dr. Kwankwanso sharing a ticket with Peter Obi will alienate genuine Nigerian patriots who have bought into the Peter Obi candidacy out of their conviction that it is a unifying, ideas driven and masses propelled pan Nigerian project.

‘By coming on television, even while the alliance talks are yet to be finalised, to categorically foreclose the chances of pairing with Mr Peter Obi as running mate, Dr. Kwankwanso has shown himself as coming to this alliance negotiations with a closed mindset and as a self-centered manipulator rather than being open to superior ideas, logics and credible electoral and political data or having the slightest pretext to patriotism.

‘And it is without any iota of doubt that should Kwankwaso by any political magic or dangerous spin of fate emerge President, he will be one of the worst primordialists and religious bigots to have presided over the affairs of this country.

‘Kwankwanso’s continuous association with the Peter Obi candidacy will be a liability rather than an asset as his utterances and those of his aides and key supporters have continued to raise eyebrows among patriotic Nigerians who are driving the Peter Obi electoral revolution out of their conviction on his competence and unquestionable patriotism.

‘It bears reiterating that Peter Obi, the presidential candidate of the Labour Party, is not motivated by any ethnic, sectional or religious sentiments nor is he banking on the votes of a particular section of the country against the other, but inspired by the dream to, working together with like-minds, accomplish a working, productive, secured and equitable Nigeria, for all, and through the votes of all Nigerian patriots from all sections and classes of Nigeria.

‘Dr. Kwankwanso’s motivation and confidence in vying for the presidency are clearly rooted on some self-serving ethnic and class biases, and such an individual shouldn’t be allowed to taint the purely progressive, selfless and people-inspired aspiration of His Excellency, Mr. Peter Obi.’