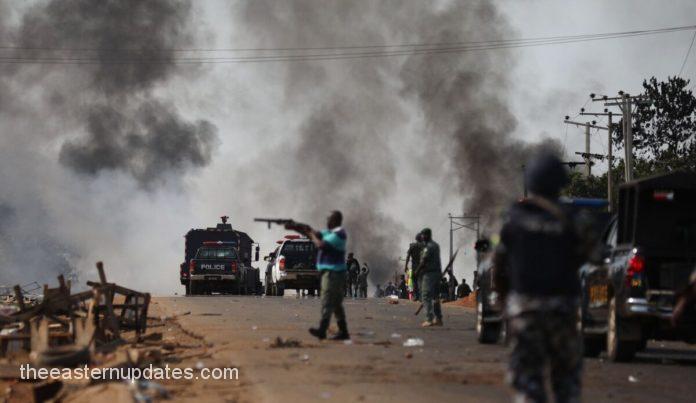 The Eastern Updates robbers operating on motorcycles, were also said to be the ones robbing roadside traders, fuel stations and keke operators at Afor-ule, Umuimo, and Kamalu streets in the area.

Eyewitnesses told reporters that the robbers were caught by irate youths after they had successfully robbed a PoS operator and some shops in the area.

Read Also: Suspected Vandal Electrocuted In A Transformer In Abia

‘After robbing the PoS operator and some shops, the robbers fled when people raised alarm. Some youths gave them a hot pursuit but they were knocked off their motorcycle by a moving vehicle. The youths caught up with them and set them ablaze; one at the opposite UBA Bank, others are burned at Union Bank junction and Star Paper Mill. These boys have been robbing PoS operators and shops.Today, nemesis has caught up with them,’ the eyewitnesses said.

The situation caused heavy traffic jam along the Aba – Owerri road as people were seen discussing the incident.

As at the time of filing this report,a patrol of team of Policemen have taken over the scene.

Police Public Relations Officer,Abia State Command, SP Geoffrey Ogbonna, was yet to respond to a text message placed on his mobile number.