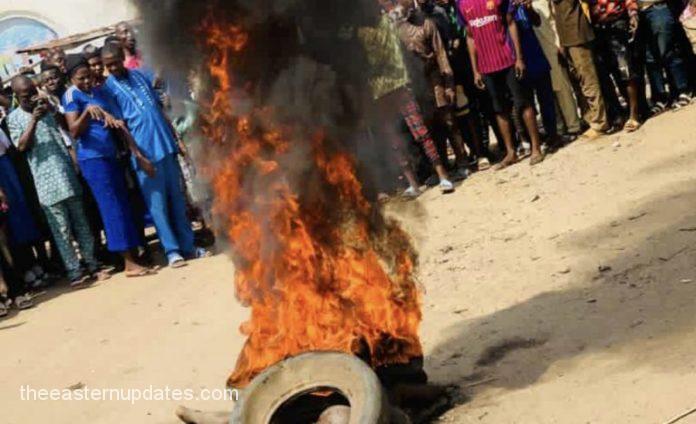 One suspected kidnapper has been set ablaze by an angry mob in Obosi community, Idemmili South Local Government Area of Anambra State.

As a 7-man kidnapping group was transporting their victim to an undisclosed location, local security in the vicinity stopped them. Six of the suspects managed to escape, but one was unlucky as the enraged mob surrounded him.

Police in the state saved two victims who had been abducted by the thugs, according to a statement from DSP Tochukwu Ikenga, the state’s police public relations officer. Their vehicles had been recovered, he claimed.

‘Preliminary information shows that security operatives intercepted a seven man kidnap gang along Awada. In an attempt to arrest the criminals, six out of the seven gang members escaped and abandoned both the victims’ vehicle and their operational vehicle. The seventh person, arrested was lynched by an angry mob and set ablaze before police operatives could arrive the scene.

‘Consequently, the Commissioner of Police, CP Echeng, while condemning the act of mob action by some members of the public who resort to jungle justice whenever they arrest suspects in respect of criminal allegations without recourse to the police for proper investigation.

‘He also urged them to always exercise restraint by not taking the law into their own hands. They should endeavour to take such suspects to the nearest police station whenever they are apprehended.

‘This would afford the police the opportunity to conduct appropriate investigation into the nefarious activities of the suspects; and bring them to justice in accordance with extant laws.

‘Meanwhile, police operatives have initiated an operation aimed at arresting the fleeing gang members and suspects who took laws into their hands by setting ablaze the arrested suspect’, the statement reads.