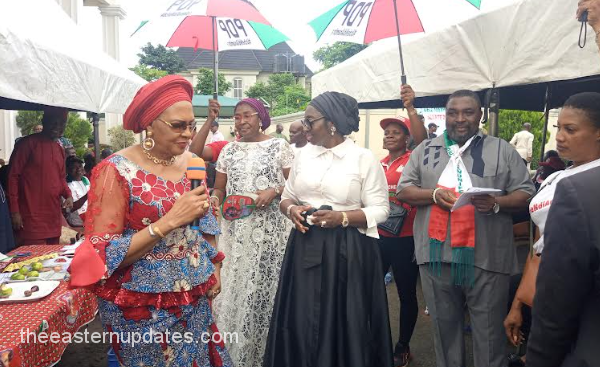 A member of the Board of Trustees of the All Progressives Grand Alliance (APGA), Dr. Uju Okeke, has announced her defection from the party to the Peoples Democratic Party (PDP).

Okeke was issued her PDP’s membership card in Nri community, Anaocha Local Government Area of Anambra State by the party’s Ward 1 chairman, Mr. Onyeka Nwaoguji, during a brief ceremony held in the town.

Also issued with membership cards of the party were Chief Lawrence Okafor and Mr. Okey Agunwa who were the former councillors of Nri ward 1 and Agulu ward 1 respectively. They both dumped APGA for the PDP.

This is even as party leaders and stakeholders in the LGA declared their total support for Senator Uche Ekwunife who represents Anambra Central Senatorial District in the National Assembly.

They said that Ekwunife, whom they described as a grassroots politician and a great achiever, has so far represented the zone very well and that there was a need for her to return to the senate in 2023 so she could continue with her good works.

Okeke, former Commissioner for Education in the state, said that she decided to dump APGA for the PDP to enable her give Ekwunife more support considering the great work she has been doing in the state, particularly in the zone.

She said that she consulted with her family and her teaming supporters who gave her their nod to join forces with the quintessential lawmaker to swell her support base ahead of next year’s election.

Ekwunife, while welcoming the new defectors, thanked them for their support so far and promised not to let them down. The lawmaker, who could not hide her joy, said that she was overwhelmed by the massive show of love she had received so far from her constituents. She promised to do more if re-elected.

The lawmaker, who listed many of her achievements for the zone including Cosmic Ray Laboratory at Nnamdi Azikiwe University, Awka, Biotechnology Lab in Abagana, Njikoka LGA, and road infrastructure in various communities, said that she would be bringing more good things to the zone.