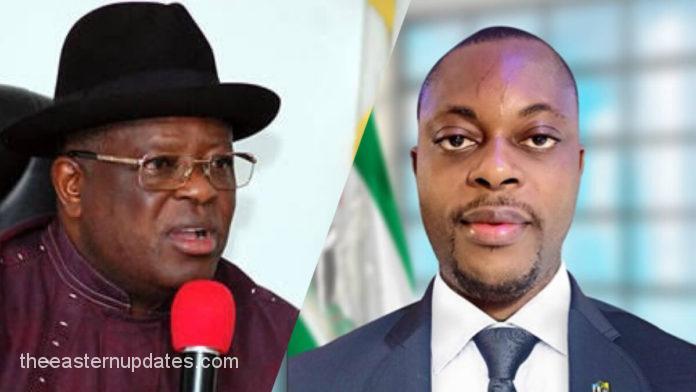 In a suprising turn of events, the Ebonyi State Governor, David Umahi has indefinitely suspended the state Commissioner for Finance and Economic Development, Mr Orlando Nweze over alleged “inability to discharge his duties effectively”.

The suspension notice was signed by the Secretary to the State Government (SSG), Dr Kenneth Ugbala, and made available to newsmen on Wednesday in Abakaliki.

The governor directed Nweze to hand over all government property in his possession to the permanent secretary of the ministry before the close of work on Wednesday, June 15.

“Please, ensure strict compliance to this directive,” the statement read.

The governor has been acting tough since he lost the APC presidential ticket recently.

A former governor of Anambra State, Dr. Chukwuemeka Ezeife has also asked Ebonyi State governor, Chief Dave Umahi to withdraw the statement he made in which he said that Ebonyi people will not vote for the presidential candidate of the Labour Party, LP, Mr. Peter Obi during the 2023 general elections.

Umahi had in the statement that went viral, said there is nothing like Igbo agenda in the forthcoming election, adding that what he has is Ebonyi agenda.

In the interview, Umahi had said: “A time for action has come. It is not a time to be complaining.

“Let nobody come to tell you about Igbo agenda. The agenda we have is Ebonyi agenda. Our party in Ebonyi is APC, not Labour Party.

“We will not vote for Labour Party. We will vote for APC which is a party that is doing all these things for us. That is the party we will vote for. The states that Labour party has helped should vote for them.

“We have to liberate ourselves from our brothers in the South East and we have to tell everyone of them our reason. We don’t have to be apologetic about it and we say it with all boldness”.

But speaking in an Arise News Television interview, Ezeife warned against such a stance at a time the country needed a real change.

He said: “We are fighting ourselves in Nigeria. God designed us to lead the blacks and we are about to begin that job.

“Now that change is coming, let us not be clannish about it. I think the time has come for melting. Let Nigeria take the advantage and let Yoruba and Igbo work together.

“I therefore appeal to all Nigerians to pray because sometimes we spoil the good things God has planned for us with our bad mouth.

“We are arrogant to the extreme. A change is coming to Nigeria and let nobody block it through arrogant propaganda.

“We need people who will think away from ethnicity. There is comprehensive corruption everywhere. Now we say we want Igbo president, but no delegate from other states voted for aspirants from South East because of money”.