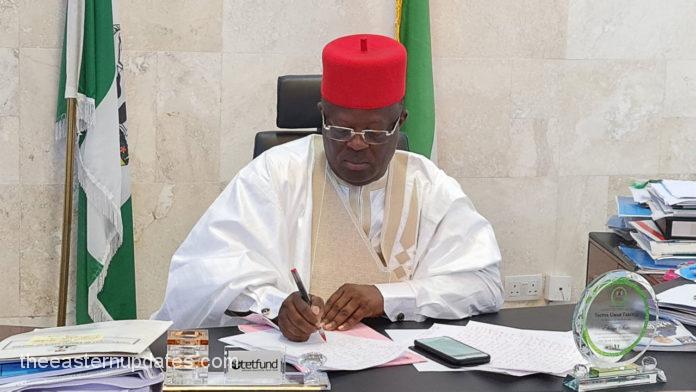 Governor Umahi’s proclamation about his support for Tinubu has had tempers running all over the place with several individuals and groups airing their opinions about how they feel about it.

While reacting to this, the Association of Ebonyi Indigenes Socio-Cultural in Diaspora, a foremost socio-cultural organisation of the state abroad, has lashed out at Governor David Umahi, over his Monday’s order to Ebonyi indigenes to vote for the All Progressives Congress Presidential candidate, Ahmed Bola Tinubu to the detriment of his Labour Party counterpart, Dr. Peter Obi, come 2023.

This is as the group observed that Governor Umahi’s betrayal was the most unprecedented in Nigeria’s political history.

Governor Umahi, had, while inaugurating his new appointed commissioners and aides, on Monday, in Abakaliki, said, “Ebonyi people will vote for APC and not Labour Party”.

The governor appears to have come under serious attacks by critical stakeholders within and beyond the South-East geopolitical zone, after the comment and had, on Tuesday, refrained from his earlier comment.

But AEISCID, in a statement signed by its President, Amb. Paschal Oluchukwu, on Tuesday, described Umahi’s outburst as disappointing, disgusting and unfortunate, saying he remains the worst betrayal in the country.

The group also slammed the governor for rejecting the leadership of Ohanaeze Ndigbo.

The statement partly read, “The Lord manor had also selfishly decreed that henceforth, only Ebonyi agenda will be his interest, not Igbo agenda. In the most bizarre manner, Umahi proclaimed that Ohaneze Ndigbo President, Prof. George Obiozor was no longer his President and that he wouldn’t have anything in common with the apex Igbo socio-cultural organisation.

“In another worrisome media statement credited to the Governor, Umahi had in a near public threat waggishly thundered that Ebonyians will only vote APC’s Presidential candidate, Bola Tinubu, and all APC candidates in the 2023 elections.

“As in the days of the infamous Roman Emperors in the first Century who often centralized authority only in their own hands using the dual control strategy, Umahi’s dictatorship has grown so much that he now assumes Ebonyi and by extension, Igbo nation to be an instrument under his imperial peerage.

“Sincerely and beyond petty party politics and patronage which has remained the bane of Nigeria’s political trajectory, this association condemns in its entirety the alarmist betrayal anthems being sang by Umahi and his unpardonable indiscretion to rob his shameful charcoal on dignified men and women of honour in the apex Igbo socio-cultural organization, Ohaneze Ndigbo.

“Umahi’s unfortunate outbursts could have ordinarily been dismissed as a one of the effects of ‘the APC Presidential Post Primary Election Traumatic Disorders’, but we have a covenant with Ebonyi people, our beloved Igbo brothers and indeed, Nigerians some of who before now misunderstood the Governor to be a hardworking political ‘saint’ to continue to keep the records straight and expose as always the evil that has held Ebonyi and its freedoms hostage since 2015.”