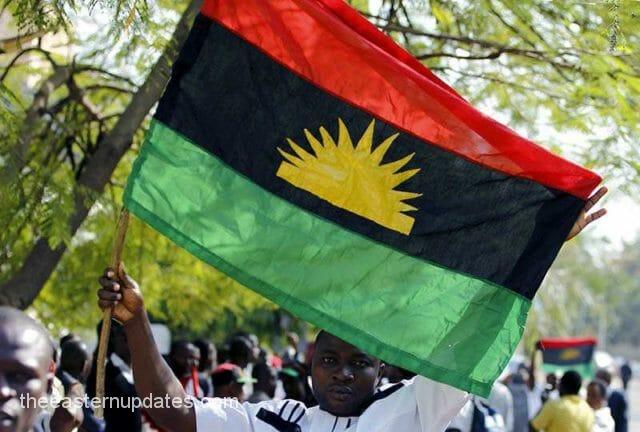 Fresh reports hitting the desk of The Eastern Updates have shown that the Indigenous People of Biafra, IPOB, on Monday have accused members of the Nigerian security agents of collaborating with the Southeast security outfit, Ebubeagu, to abduct Igbo youths in the region.

IPOB alleged that Nigerian security agents in collaboration with Ebubeagu kidnap, kill, and harvest vital organs of their victims across the Southeast.

Emma Powerful, the spokesman of IPOB, said they have turned the kidnapping and harvesting of organs from Igbo youths into a lucrative business.

A statement by Powerful reads: “We the global family and movement of the Indigenous People of Biafra (IPOB) ably led by our great leader Mazi Nnamdi Kanu wish to state clearly to all and sundry that the Nigeria Joint Taskforce comprising Ebubeagu, Nigeria Army, Police, Civil Defense Corp and DSS agents representing the image and interest of the evil Nigeria security outfit are evidently known as criminals and armed robbers, kidnap sponsors, Arms runners lenders and murderers of the innocent citizens in Biafraland.

“The JTF kidnapping enterprise established or revamped by evil politicians in Imo State and their new operation spots within where they lay criminal ambush and conveniently abduct for ransom. As their name implies “Task force” they now kidnap all classes of people daily within Okporo, Umuna, Amaifeke, Owerrebeiri, Umutanze and Akata in Orlu LGA of Imo State. They continue their dangerous rape against our females and mothers in Orlu zone of Imo State.

“It has become imperative to state that the Nigeria Government and her security operatives have turned the Kidnap and killing of IPOB and Igbo youths as a lucrative enterprise through which they generate Revenue for the Nigeria Government. They are also deeply involved in harvesting the organs of our youths in Imo state and other parts of Biafraland.”

IPOB called on Governor Hope Uzodinma of Imo State and the All Progressives Congress, APC, to stop the security agents from killing Igbo youths.

Powerful also called for an end to the burning of properties in the Southeast by security agents and Ebubeagu.

He said: “Governor Hope Uzodinma, his Government, and political party APC are aware that IPOB is a peaceful movement and we call on him to recall the killing machine he assembled to extaminate our people.

“Our demand to him is to instruct the killing squad of “Military and EbubeAgu militia” to immediately desist from the further killing of his people and vacate Orlu and the entire Imo State.

“We the IPOB have had enough of the criminality and murder being perpetrated by these murderous combined government militia because all those politicians behind this devilish activities would soon regret being involved in such wickedness. We demand for an immediate halt to these operations and burning down of people’s properties and houses to avoid equal consequential resistance from IPOB which no one should blame IPOB when it will start because we would not continue to condone such barbarities.”

The separatist group called the attention of the international communities to the alleged killings of Igbo youths.

“In calling the International community to pay attention to these barbaric acts and draw their focus to the plight of our people, we deem it proper to commend Amnesty International, Intersociety group, and few others for standing on the side of truth as they had previously covered and documented genocidal crimes against Biafrans and the unarmed, defenceless IPOB family members by the Nigerian Military and the Police.

“We call again for you to note that the killings and abductions have increased exponentially and are being silently perpetrated by the security agencies as the disappearance of young people in Igbo-land with the harvest of their organs in Orlu Imo State and killing of Biafra youths has become the order of the day in Biafraland.

“We remind the International communities’ that their silence is not golden, rather their opinion and involvement speak volumes, therefore IPOB extends calls to the EU in Nigeria, the US in Nigeria, the UK in Nigeria UN in Nigeria, the African Union, Israeli in Nigeria, Russia in Nigeria, China in Nigeria, India in Nigeria, German Delegation, the Canadian government, all diplomats, diplomatic missions, CHOGM and including all ambassadors and High Commissioners in Abuja and Lagos as well as Gov. Hope Uzodinma and other States Governors in Biafraland occupied by Nigeria to the current wave of the violent rape of our women and young ladies especially when they can not afford the Ransom payment to their abductors most of whom are members of EbubeAgu and the military as testified by defenceless survivors.

“IPOB remains resolute, disciplined, and intact. Despite the provocations, we have remained focused and faithful to our fundamental objectives never allowing ourselves to be distracted or stampeded into criminal activities which is what the Nigerian government had hoped to achieve.

“We are aware that the International communities’ representatives in Nigeria are not completely ignorant of the numerous unfolding criminal activities, State-sponsored acts of terror, and the Nigerian government’s direct/proxy involvement in almost all of these coupled with their use of the Nigerian Media to change the narrative by attempting to hide their culpability, and in turn wickedly blackmail and use propaganda against their victims.

“They are also not unaware of the Nigerian government’s mission to exterminate Biafrans who’s only demand is a democratically recognised and international accepted process of (REFERENDUM) which is our fundamental human right and the only political solution between Biafra and Nigeria face-off,” he added.