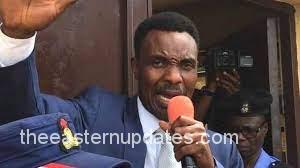 As the power tussle in the Enugu APC party ensues, Barrister Ben Nwoye who is the pioneer chairman of the All Progressives Congress, APC, in Enugu State, has apologized to former Governor of the State, Senator Chimaroke Nnamani over the recent comments made against him by Barr. Ugo Agballa who is currently leading the party in the State.

But speaking to journalists on Thursday, Nwoye said he was apologizing to Nnamani, Ekweremadu and Mbah on behalf of the APC.

He said it was necessary to apologize to the trio over the diatribe by Agballa, who he referred to as a factional chairman of the party in the State.

“They should understand that Ugo Agballa’s ranting does not represent the views of APC members in Enugu State,” Nwoye said.

He said it was saddening that Agballa instead of concentrating on the litany of cases against him “jumped into what he called a world press conference where he was busy abusing people who are not his match.”

“Senator Chimaroke Nnamani was a two-term governor and has now returned to the Senate for a third time because Ugo Agballa’s candidate is no match to him.

“Ekweremadu is also someone who has been Deputy Senate President for three times, even under a ruling party, the APC.

“So, they are far ahead of Ugo Agballa. For Ugo Agballa to begin to spew all manner of venom is touting, calling people terrorists, that’s wrong

“He also has no right to stop Ekweremadu, he is free to join APC with his supporters, after all Ugo Agballa has not attracted any significant persons into the party. APC Enugu State is in coma if not dead because nothing is happening there.

Nwoye went on to commend the PDP, the All Progressives Grand Alliance, APGA, and the APC for zoning their governorship tickets to the Enugu East Senatorial zone.