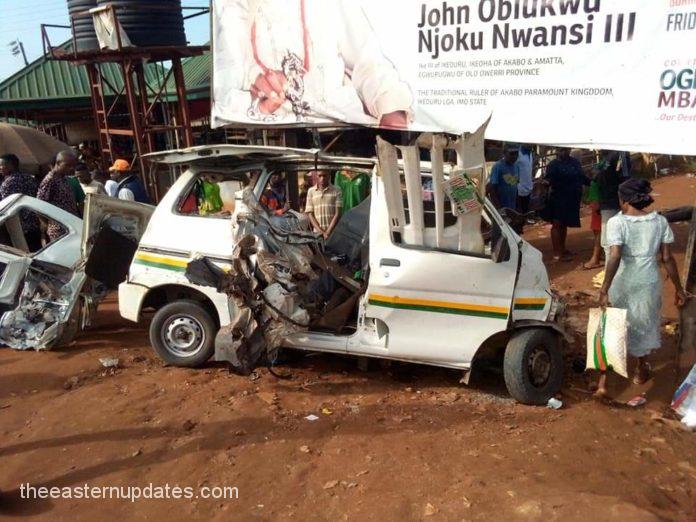 An auto crash that occurred on Saturday evening in Imo State has claimed no fewer than eight lives.

The incident happened at Akabo market on the ever-busy Owerri- Okigwe Road in Imo state.

Eyewitnesses told The Eastern Updates that the fatal accident was a head-on collusion between two vehicles coming in opposite directions.

It was further gathered that nobody survived from the two vehicles as the incident was very fatal.

The crash was between an unmarked Hilux vehicle and a commercial vehicle popularly known as ‘Bus Imo.’

One of the eyewitnesses, who identified herself as Chike Ibem said, ‘it was a face-to-face accident between a Hilux vehicle and Bus Imo. It was fatal. Eight persons in the vehicles died on the spot. To be alive is a big miracle.’

In a related development, no fewer than three persons were killed in an accident involving an 18-seater bus along the Ado-Ilawe Road in Ekiti State on Friday .

Sources said the bus driver, who was oblivious of the windy and hilly nature of the road, was at top speed when the bus, which was conveying five persons, plunged into a ditch and caught fire.

A source said, “Three persons were burnt beyond recognition, while others sustained terrible injuries. The victims have been moved to a hospital in Ado Ekiti.”

Abutu said, “This is just to confirm that the accident happened in the early hours of today (Tuesday). Five persons were in the vehicle; in the process, three of them got burnt to death. The remaining two were rescued to a hospital.I

The Eastern Updates reports that investigation has commenced to ascertain the cause of the accident.