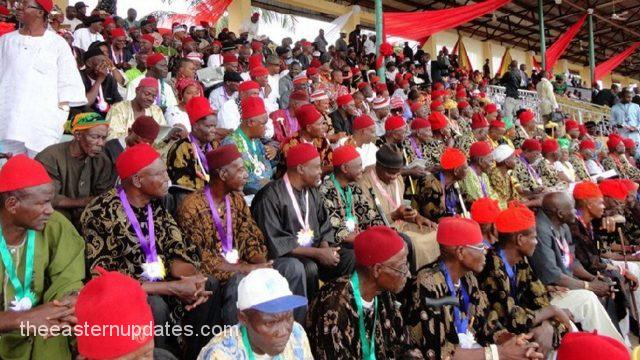 As political parties gear up for primary elections to elect their presidential candidates ahead of the 2023 general elections, prominent Igbo leaders have appealed to the ruling All Progressives Congress (APC) and the Peoples Democratic Party (PDP) not to jettison the principle of power rotation, which they described as ‘the agreed chord that ties Nigerians together.’

They lampooned the power play and scheming that had prevented the parties from being categorical in zoning their presidency and warned that any arrangement that precludes the South from producing President Muhammadu Buhari’s successor may ‘provoke a reaction that will usher in a new political alignment.’

The Southeast leaders, who have been going round the country to lobby that the presidency should be zoned to the sub-region, said that their demand is predicated on the principle of fairness and section 14(3) of the 1999 Constitution, which is designed to ensure that the federal, state and local governments are constituted in a manner that no particular ethnic or religious group is left out and which established the Federal Character Commission.

The prominent Igbo leaders, under the auspices of Great Nigeria Conference (GNC), disclosed that zoning the presidency to the Southeast would not only douse youth restiveness in the area but also heal the wounds people in the zone suffered during the civil war, stressing that, “what is good for the goose is also good for the gander.”

They acknowledged that though the Igbo are spread across the Northeast, Southeast and South-south, their quest is for power rotation to the Southeast.

Members of the group who visited the Rutam House, corporate head office of The Guardian in Lagos at the weekend, included its Vice Chairman, Senator Victor Umeh and Vice Chairman, Contacts and Mobilisation Committee, Ferdinand Agu. They stressed that politicians whose origin can be traced to the Southeast geopolitical zone can only be considered for the plum job in the interest of justice and fairness.

GNC said, “We are saying that Nigeria is divided politically and not tribally. You have Ijaw in Ondo State and we have Ijaw in Bayelsa State. If we say we are looking at South South, an Ijaw man in Bayelsa should contest, but that doesn’t mean that an Ijaw man in Ondo State will also contest. Let me just make it clear please, we have absolutely nothing against our brothers whether they are Igbos from Cross River, Benue, Rivers, Kogi, Edo, or Delta states. What we are saying is that we are dealing with the political geography of Nigeria and for now, we are talking about the Southeast zone. We don’t want to abuse their rights. If, for instance, Amaechi is contesting and it is zoned to the South south, why not? And if you say it is zoned to Southern Nigeria, they are part of Southern Nigeria. But we are simply saying that our preference for today is southeast because that is the source of rotation.”

They continued: “If we decide to rotate by tribe we will have 250 rotations, which will be very unhealthy. Nigeria is rotating by zone, so there is absolutely nothing against those Igbos. We are simply saying that in terms of our geo political rotation, they are not from Southeast.

The group said that Nigerians from the Southeast are particularly pleased to note that notable cultural group from the Southwest, Afenifere, being led by Chief Ayo Adebanjo and the leader of the Pan Niger Delta Forum (PANDEF), Chief Edwin Clark had endorsed the quest by the Southeast to produce the next president.

The group particularly wondered why politicians from the North are yet to openly accept that the presidential ticket of the major political parties should be conceded to the Southeast.

They made reference to 1999 when Peoples Democratic Party (PDP) and All Progressives Party (APP) in alliance with the Alliance for Democracy (AD) conceded the presidential ticket to the Southwest to assuage the feelings of the people over the death of Chief MKO Abiola and annulment of June 12, 1993 presidential election.

The group said the South will not be happy if the North capitalised on their political strength and their number of delegates to alter the zoning agreement and “hijack the ticket.”

To them, such action will continue to remind Nigerians of the inherent flaws in the 1999 Constitution and how the Military had skewed the political structure in Nigeria to favour the North.