HomeFeaturesTurmoil In Imo Community As Police Clash With Youths
Features

Turmoil In Imo Community As Police Clash With Youths 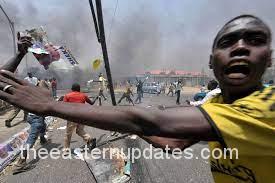 There was huge pandemonium as the Amakpaka community in the Mbaise Local Government Area of Imo State was completely deserted following a reported clash between some Nigerian police officers and some youths.

The clash was said to have emanated in the early hours of Saturday when officers reportedly stormed the community to arrest one Agu Ugochukwu.

According to sources, Ugochukwu was accused of assaulting one Nick Akobundu, a retired police officer and the chief security officer (CSO) of the Umuawada autonomous community.

Chima Uzoigwe, a resident of the community said that Akobundu was beaten up over alleged high-handedness and intimidation.

“In return, Akobundu invited police to arrest Agu Ugochukwu who was among the youths that assaulted him,” Uzoigwe said.

“Policemen came to arrest Agu Ugochukwu in their family house, but he was not at home as at the time of the arrest. Police officers then tried to arrest his brother, who was not in any way involved in the matter, and he resisted the arrest and that resulted in the fracas.

Another source in the community, who didn’t want to be named, also narrated the circumstances surrounding the incident.

“There was an incident involving the police and a family from Amakpaka Umuawada. The police set the man’s newly-built house on fire,” the source said.

It was learnt that the ever-busy Orie-Onuoha market square was deserted by residents who fled the area during the clash.

The police officer who sustained injuries was said to have died.

But when contacted, Michael Abattam, the Imo police command spokesperson said, “We are yet to receive such information and no police officer has been reported dead in our command.”