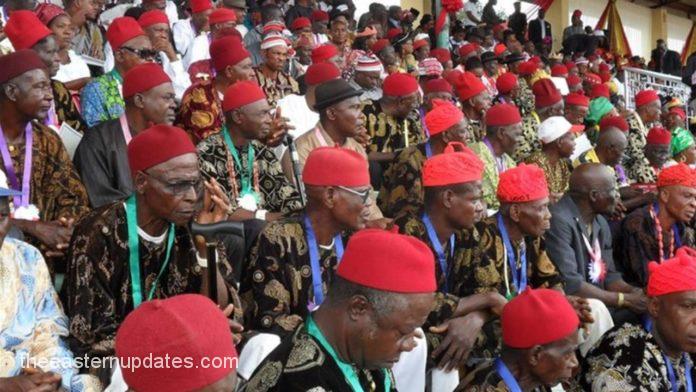 Apex Igbo socio-cultural organisation, Ohanaeze Ndigbo, have threatened a boycott of the 2023 presidential election should the two major political parties, the All Progressives Congress (APC), and the Peoples Democratic Party (PDP) refuse to zone their tickets to the Southern region.

This came in reaction to the latest stand of the Arewa Consultative Forum, ACF, and the Northern Elders’ Forum, NEF, who both believe the presidential contest should be thrown open.

However, Ohanaeze in a statement through its Secretary-General, Mazi Okechukwu Isiguzoro said in a statement made available to The Eastern Updates, said that the abolition of the gentleman agreement on power rotation would come with dire consequences.

He said it was obvious that “the Northern Elders’ Forum has opted for absurdity in issues that will strengthen internal democracy in all political parties and in the country.”

He, however, warned that “any attempt by northern socio-cultural groups to arm-twist the two major political parties, through their sons who are National Chairmen of both the APC and the PDP, to derail the electoral process, will lead to revolts and boycott of the 2023 presidential election in the South, especially in the East.”

He claimed that the leadership of both political parties were under coercion from northern lobbyists and northern socio-cultural groups “to destroy the trust and confidence that bind Nigerians together through the rotational presidency between the North and the South.”

He said those making such moves ought to have learnt from the sad experiences of the North when they frustrated President Jonathan’s administration and installed Buhari in 2015.

“The aftermath of that betrayal is the worsening insecurity in the North,” Isiguzoro said.

He declared that, ‘we will encourage the Southern Governors and socio-cultural groups to mobilize our people and boycott the 2023 presidential election in the South, especially in the South-East if the Northern candidates emerge in APC and PDP.

‘Whenever it gets to the turn of the Igbo, the narratives will always change against them.

‘Whenever it’s the time for the Igbo to attain any position, there will be gang ups and clandestine networks to fuel crisis and disasters against them, but it won’t work this time. Igbos will surely survive all these political conspiracies against them.’

The Eastern Updates reports that there has been serious clamour for the Presidency to be zoned to the South in 2023.