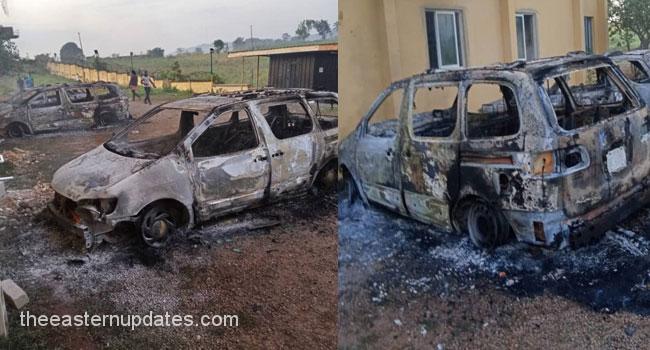 Some yet-to-be identified Gunmen, suspected to be enforcing a two-day sit-at-home order on Friday attacked the Ebebe Junction in the Abakaliki metropolis, Ebonyi State, burning a vehicle and scaring people away with gunshots.

Investigations revealed that the attackers, who struck the area at about 6:20 a.m, on Friday, set a vehicle ablaze while a motorcycle operator escaped death by the hoodlums.

A resident of the area, Anayo Chukwuemeka, said the attackers fired several gunshots that got residents panicking and scampering for safety.

“It happened in a flash. But, when the gunshots died down and we came out, we saw that a vehicle had been burnt beyond recognition.

“The driver of the vehicle who managed to escape told us that the gunmen said they are enforcing the sit-at-home declared in protest of President Muhammadu Buhari’s visit to Ebonyi.

“A motorcycle operator who also escaped the attackers’ gunshots told us that they fired at him but he miraculously dodged the bullets,” he said.

Another resident, Simon Onwe, a shop owner in the area, told our correspondent that the attackers came in a vehicle without a number plate and shot sporadically in the air and fled immediately.

“I was still inside my shop because I slept there; I heard the gunshots but I discovered later that they left a vehicle burnt beyond recognition while a motorcycle operator told us that he narrowly escaped their bullets,” Simon added.

Efforts made to get the reaction of the Ebonyi State Police Command failed, as of the time of filing this report.

Calls made to the Police Public Relations Officer, Loveth Odah, could not be answered.

She was also yet to respond to messages sent to her mobile by our correspondent.