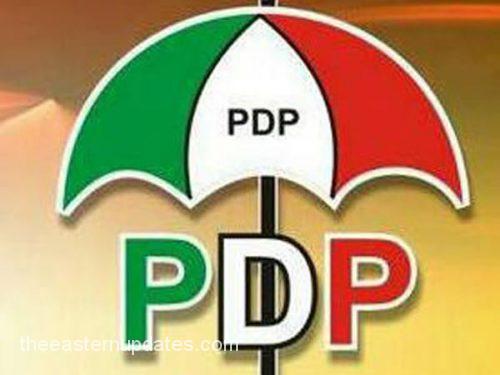 Crisis marred the 3-man delegate election of the Peoples Democratic Party (PDP), in Ebonyi State which was scheduled for Tuesday resulting from leadership tussle between Silas Onu and Tochukwu Okorie who are laying claims to the chairmanship position of the party in the State.

The Eastern Updates gathered that the delegate election, which was scheduled to hold in the early hours of Tuesday, was delayed till evening, when unknown hoodlums took over the PDP Secretariat and started shooting sporadically to scare participants away.

According to eyewitnesses, it was the hoodlums first fired gunshots at the party secretariat.

Some policemen who were inside the party office rushed out but couldn’t arrest the hoodlums due to lack of operational vehicles.

The South East Zonal Youth Leader, Hon. Chidiebere Egwu, who spoke to journalists, said it was a minor issue which had been sorted.

He said: ‘There is no cause for alarm. The situation has been controlled. There is no need for panic.’

However, the party office was deserted after the situation calmed down.

Meanwhile, the exercise as at 4pm was yet to commence following the delay in the arrival of the materials.

Some of the party chieftains who were at the party office, also alleged that some persons hijacked the materials and called for full investigation into the delay in the arrival of the materials.