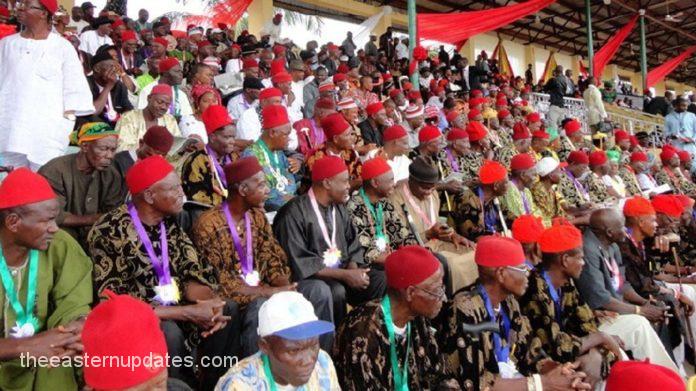 Apex Igbo socio-cultural organisation, the Ohanaeze Ndigbo Worldwide have called on the Northern Elders Forum (NEF), to embrace equity and justice by standing with the South East region in their quest to produce the next Nigeria president in 2023.

Ohanaeze made this call through its National Publicity Secretary, Ohanaeze Ndigbo Worldwide, Alex Ogbonnia, in a reaction to the statement credited to NEF, that the presidential race should be thrown open to all the zones in Nigeria in the next general elections.

The Apex Igbo group argued that in ‘1994, some Nigerian patriots conceived an article of faith and principle of rotation of power that guarantees equity and inclusiveness for all the diverse components of the country.’

Therefore the NEF should embrace a rotational presidency for the corporate existence of Nigeria.

Read Also: Ohanaeze Advises Oluwo To Conduct Himself Well As A Monarch

According to Ohanaeze, ‘The attention of Ohanaeze Ndigbo Worldwide has been drawn to the communique issued by the Northern Elders Forum (NEF), captioned ‘2023 Presidency: Northern Elders Kick against Zoning‘.

The communique which was signed by the force-Chancellorllor of the Plateau State University, Professor Doknan Danjuma Shenni, among other issues stated that the ‘2023 presidential contest should be left open to every region of the country for the best candidate to emerge.

Ohanaeze Ndigbo expresses shock that the leadership of the Northern Elders Forum, mostly elders, will collectively as act the fifth Roman emperor, Nero Claudius Caesar Augustus Germanicus who fiddled while Rome was on fire.

‘In the communique, the NEF observed that Nigeria is confronted with unprecedented insecurity, poverty, a large number of internally displaced Nigerians, etc. These are issues that have remained unabated because of ethnic and religious-induced policies, injustice, and more importantly, the inability to make the right choices.

‘It is therefore very strange that the elders instead of seeking solutions to the problems they have so identified are busy strategizing on how to destroy the vital values that has helped to lubricate a precarious balance in the country.’

They went on to point out that, ‘At about 1994, some Nigerian patriots conceived an article of faith and principle of rotation of power that guarantees equity and inclusiveness for all the diverse components of the country. Thus, Nigeria was structured into six geopolitical zones; nameSouth-Southouth, South East, South West, North West, North Central, and the North East. It was also agreed that political offices will be zoned or distributed among the zones in such a way that every zone will have a sense of belonging. Furthermore, the presidency will rotate among the zones to promote peace, unity and progress in Nigeria.

“The NEF are aware that Nigeria has religiously followed the rotation and zoning principle since 1999 with Chief Olusegun Obasanjo (South West) as the elected President of the Federal Republic of Nigeria. Obasanjo, in keeping with the rotation principles le, was handed over to the North in the person of former President Umaru Musa Yar’Adua in 2007.

‘At the death of Yar’Adua, a Southerner, specifically South-Southouth in the person of Dr Goodluck Jonathan was elected the President. Jonathan again, handed over to a Northerner, President Muhammadu Buhari whose second tenure of four years each will end in 2023. By the rotation and zoning principle that has been in operation in Nigeria, It is only fair that the presidency is zoned to the South, specifically the South East of Nigeria.”

‘It remains the moral duty of elders to guide the society on the path of truth and honour. It was Alex Tocqueville who admonished that ‘when the past no longer illuminates the future, the spirit walks in darkness’. The NEF know full well that in the interest of peace, unity and corporate existence of Nigeria, we the elders must, as a matter of necessity, embrace equity and justice. It is therefore only fair that the South East of Nigeria should be supported to accede presidential power because what is good for the goose is, good for the gander.

‘It is also surprising that NEF is enamoured of power than the veritable and conducive environment under which sustainable national development can be attained. For the avoidance of country on the planet earth that can progress under the dire straits and strains of inequity, injustice, mistrust, viciousness, braggadocio and predatory ethnocentrism,’ Ohanaeze said.

The Eastern Updates reports that the issue of zoning has remained unresolved less than 30 days to the Presidential primaries of major political partiers in Nigeria.