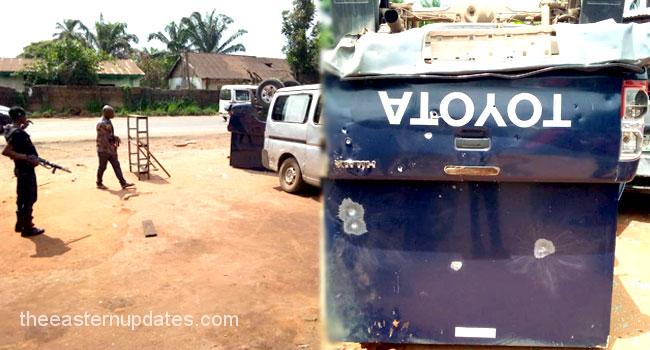 The Public Relations Officer of the Imo State Police Command, Mike Abattam, confirmed the attack on Thursday in Owerri, the State capital.

He disclosed that the incident occurred on Thursday afternoon at Nguru community in Mbaise Local Government Area of the State.

Narrating how the incident happened, Abattam explained that the bullion van was returning to Owerri after delivering money at one of the commercial banks in the local government.

He added that the bullion van was attacked by the gunmen who caught up with the vehicle with the intention to cart away the money it was conveying.

Abattam said the driver of the van made several attempts to escape the attack, but the vehicle somersaulted in the process. No life was lost in the incident.

He stated that no money was carted away from the bullion van which he said was empty at the time of the attack.

The Eastern Updates gathered that the bullion van took off from Owerri, the state capital, and was expected to offload cash at one of the new generational banks in Mbaise when it was attacked.

An eyewitness whose name was given as Kennedy Onwunali, told newsmen that the gunmen attacked their target at the General Hospital in Mbaise.

He said the attackers shot at the van continuously, but the driver was courageous enough to keep moving.

According to the eyewitness, the bullion van overturned after the driver continued dodging the gunmen.

He said, “The gunmen intercepted the bullion van at Hospital Junction, Mbaise, but the driver was courageous enough to keep moving. They went after him and kept shooting. Everybody scampered for safety. The van later overturned, but the armed robbers ran away. No life was not. No money was lost. The driver survived with a bank official and police escort.

‘The police have arrived at the scene and taken over. But economic and commercial activities came to an abrupt end because of fear. There was serious panic.’

According to the command’s spokesman, the gunmen fled the scene upon noticing that the vehicle was empty while the commissioner for police in Imo has drafted a police tactical team to the area.

He said the security operatives were asked to ensure the assailants were arrested and restore calm in the area.