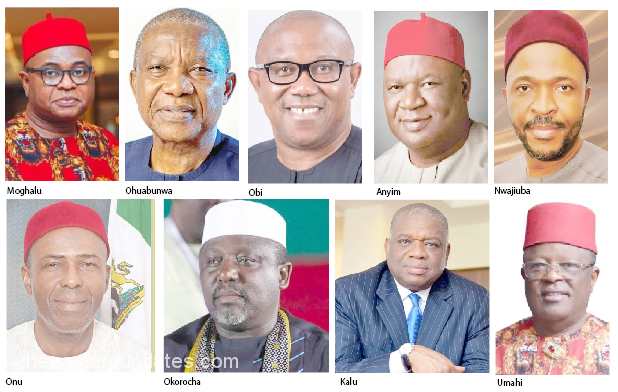 As the campaign to the 2023 presidential election heats up, it is critical for Ndigbo to become more focused and cohesive as a people if they are to successfully saddle Nigeria’s highest political leadership.

Rotimi Amaechi, Hope Uzodinjo, or sorry, his last name is actually Uzodimma, but he acts in the opposite way to his given name, which is why ‘Uzodinjo’ sounded more appropriate. Then there are others, such as Rochas Okoroawusa, oh! Another blunder – Okorocha; also, given his purported ‘love’ for an unwavering commitment to the North, one would agree that the name ‘Okoroawusa’ is most appropriate. Senator ‘Ibereberism’ has elevated his fealty to the Hausa/Fulani oligarchy to the level of open sycophancy.

Senator Orji Uzor Kalu is another zealous stooge of the Fulani Caliphate, and despite the fact that these men have full-blooded Igbo blood in their veins and masculine testicles between their legs, they allow themselves to be sold out; so much so that they are willing to sell their own people or zone to appease their Fulani Lords.

Now, in all seriousness, this editorial is not condemning or disparaging loyalty; rather, it is condemning the sycophancy in which the aforementioned names are horribly involved. They do not appear to understand what loyalty entails. In a pragmatic sense, they are never loyal to anyone or anything. Their only loyalty is to their bellies, which have evolved into their ‘Chi’ in their quest for economic gain and political clout, which they believe can only be provided by their so-called Caliphate Masters.

Regrettably, their slave masters from the Caliphate are aware of their insatiable desire for material possessions and continuously involve them in monetary rackets, for which their running dog, the EFCC, will continue to witch hunt them.

Is this a deliberate attempt at mocking the aforementioned names? Certainly not! Calling anyone what they are is not an insult. However, this is a call to unity, and it is not the time to betray one’s own constituency, people, or tribe. It is a call to stand up for and identify with one’s constituency or tribe, and to consistently defend and promote it or them for the sake of the correct aim or virtue.

It is critical that the Ndigbo wake up from their slumber and assume presidential leadership.This is not the time for quarrels, faction formation, or allowing the enemy to infiltrate their camp. This is the time to build synergy and strategic alliances that will bring Ndigbo’s joint goal closer to reality.

Obviously, Nigeria needs a regional administration system more than anything else. However, it is not feasible at the moment, thus the need for an Igbo president is necessary. This is possible if Ndigbo understand one thing: the necessity of forming a common force. The powerful Northern oligarchs, backed by the British empire, kept the South East geopolitical zone out of the presidency for 56 of the 62 years that Nigeria was independent from British rule. They wanted to keep all of Nigeria’s oil for themselves.

This injustice had progressed to the point that it could no longer be tolerated. It is past time for the five governors of the Southeastern states to work together with their senators and representatives and any other well-intentioned Igbo politician or official with significant political influence to achieve the election of an Igbo president in 2023.

Why does this hatred of Ndigbo exist? When did it all begin? It is the result of the ingenuity of Ndigbo, an inherent ability. To the point where the Ndigbo are now Nigeria’s most despised tribe,

The second reason is that it started after the 1966 revolution led by the late Major Chukwuma Kaduna Nzeogwu, who was supposedly Igbo but who was more of a Northerner by character, among many other things. In a fit of youthful exuberance and the drive for change, the firebrand officer took it upon himself to transform Nigeria, but unfortunately, the intention ended up being a bloody coup in which some politicians were killed.

Shortly thereafter, a countercoup by Northern military officers, led by General TY Danjuma (Retd), took place, and the first Nigerian military general, Major General Johnson Thomas Umunnakwe Aguiyi-Ironsi, was assassinated in cold blood. In spite of that, the North’s bloodthirsty military officers were still not satisfied with the vengeance they had received.

The pogrom took place between May 1966 and September 1966, just after Gen Yakubu Gowon (Retd) took over as leader of the country, and the most unfortunate thing is that he did nothing to stop it, and his actions led to one of the most bloody civil wars in African history. It resulted in the deaths of between 8,000 and 30,000 Ndigbo. The war, or more accurately, the genocide in Biafra, resulted in over 3,000,000 civilian deaths.

Despite all the Ndigbo have been through and still are going through in Nigeria, they are still bringing a spirit of brotherhood and unity to the country, yet a section or two of Nigeria do not see it as appropriate for an Igbo to become president. This narrative must change, and that will begin when Ndigbo form a stronger bond and adopt one consensus candidate.

Facebook
Twitter
WhatsApp
Email
Telegram
Previous articleSoludo’s Offer: ‘IPOB Are No Criminals To Be Given Amnesty’
Next articleIPOB: An Avenue Must Be Created For Dialogue – Prof. Odoh