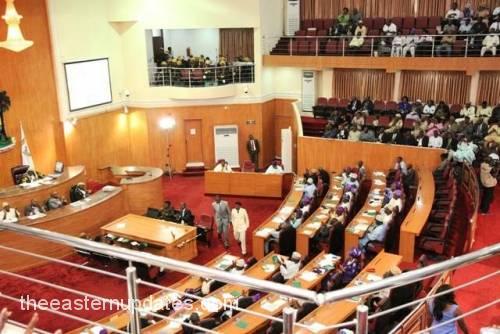 The crisis in Ebonyi State house of Assembly took a new twist on Tuesday as seats belonging to three lawmakers elected on the platform of the Peoples Democratic Party were declared vacant by the House on Tuesday.

The Eastern Updates gathered that the seats were declared vacant following a letter of resignation forwarded by the three lawmakers.

It was gathered that the three lawmakers and their PDP colleagues were not at the sitting, while fifteen lawmakers of the All Progressives Congress were on seat.

The letter was read by the speaker, Francis Nwifuru on the floor of the House after which he declared the seats of the three lawmakers vacant.

Nwifuru directed the clerk to write to the Independent National Electoral Commission (INEC) to notify the electoral body of the development and the need to conduct fresh elections in the affected constituencies.

The Eastern Updates had two weeks ago, reported an Abuja Division of the Federal Court, had reinstated Hon. Odefa Obasi Odefa, as a member of the Ebonyi State house of Assembly and also the Deputy Speaker of the House.

The Court also restored the seats of Odefa and two other Lawmakers whose names were given as Ngọzi Eziụlọ (Afikpo North/East) and Oliver Osi (Ivo).

The court’s order followed a motion ex parte dated 24th February 2022 and filed by the trio as plaintiffs challenging the declaration of their seats vacant and removal of Mr Odefa as Deputy Speaker by the State House of Assembly, last month.

It further barred the House of Assembly Speaker and the Clerk from carrying out any action that will affect the membership of the three lawmakers.

The Eastern Updates recalls that the House, had, last month, declared the seats of Odefa and the two other lawmakers vacant.