HomePoliticsWike's Envious Of My Achievements, Umahi Fires Back
Politics

Wike’s Envious Of My Achievements, Umahi Fires Back 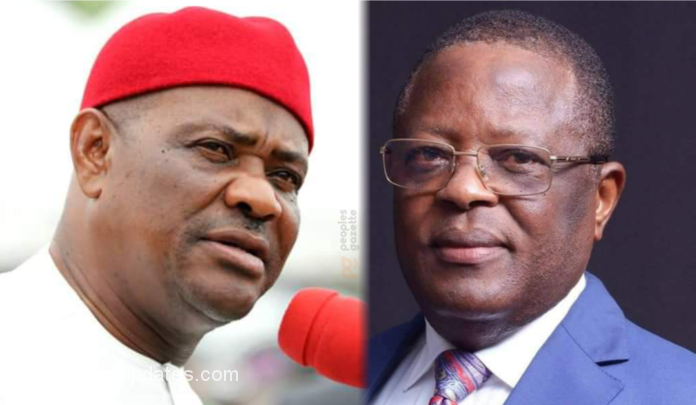 The Governor of Ebonyi State, David Umahi has fired back at his Rivers State counterpart, Governor Nyesom Wike asserting that he is only envious of his numerous achievements.

The Eastern Updates recalls that Wike had attacked Umahi last week, saying even if he goes to the Supreme Court, the PDP would be there to claim its mandate from him.

He added: ‘Look at a governor making a reckless statement simply because a judge made a judgement according to his own opinion, which you are entitled to appeal up to Supreme Court.

‘You have called somebody a thief in the market and you’re saying I’m sorry, it is late. That you’re sorry, we the members of the public, we don’t take it.’

Reacting to Wike’s ranting, Umahi, in a statement issued by Francis Nwaze, Special Assistant to the Governor (Media and Publicity), said he came across a video Wike in which he was quoted as saying that he masterminded the Abuja High Court judgment on him for defecting to the All Progressives Congress, APC.

‘Not much surprised at the comment though, we would have ignored it as one of his blubberings but it has become imperative we make a few annotations for clarity.

‘Wike from the statement has taken responsibility for the pronouncement of the Federal High Court, thus requiring that he explains to Nigerians how he now calls the shots in the Nation’s Judiciary without being a Judge.

‘While we will not get intoxicated and begin to comment on a case that is already pending in a Court of competent jurisdiction like Wike, we like to place it on record that Ebonyi State is not in the same geopolitical Zone with Rivers State and so nothing would have prompted Nyesom Wike to make such unguarded comment about Governor Umahi if he is not a cheeky hatchet job-man.

‘It is on record that Governor Umahi since the legal battle started has conducted himself properly by filing an appeal in a Court of Superior records and did not resort to horse-trading like his counterpart, Nyesom Wike who speaks as if he has the Nigeria Judiciary in his armpit, which is impossible.

‘We are however not unaware that the envy of Nyesom Wike is the earth-shattering accomplishments of the Governor Umahi led administration in Ebonyi State which include but are not limited to over seventeen twin flyovers, State of the art King David University of Medical Sciences, the best of its kind in Africa, the shopping mall, the best International Airport in Nigeria, payment of civil servants, massive empowerment of the youths, widows, clergy and so much more,’ the statement said.

The statement said ‘while not joining issues with the Governor, we like to remind Wike that hence he rigged himself out of the 2015 Appeal Court ruling dismissing him as Governor of Rivers State, Governor Umahi would come out of his current legal issues stronger and unscathed while still proceeding on his presidential ambition gallantly.

‘Not minding his looney voice, we want to emphasize that Governor Umahi and Ebonyians have absolute confidence in the Nigeria Judiciary to carry out an unbiased adjudication which would open a new vista of precedence in justice dispensation in Nigeria.

‘We urge Ebonyians and supporters of Governor David Nweze Umahi across the Country and beyond to remain peaceful and resolute lest the likes of Wike and other political desperados score a cheap political point by the reason of their conduct at a time like this.

‘We also enjoin Ebonyi citizens and the reading public to disregard the hapless surmise of a man reputed for orchestration of unhealthy and brutish governance under a Democracy.’

Umahi had last week obtained an order of the court to stay in office for 7 more days while his appeal is being heard.