HomeFeaturesDriver, Two Others Killed In Road Accident In Anambra
Features

Driver, Two Others Killed In Road Accident In Anambra 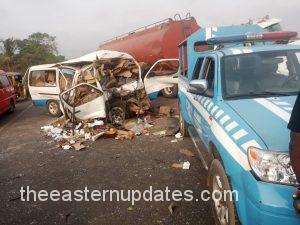 A bus driver was on Friday confirmed dead in an accident at Nkwelle Junction on Onitsha-Nteje Expressway in Anambra in an accident which left many injured.

The Federal Road Safety Corps in the state, through its Sector Commander, Mr Adeoye Irelewuyi, confirmed the incident to newsmen on Friday in Awka.

Irelewuyi said the accident occurred at about 7 am on Friday.

He blamed the accident to reckless ‘wrongful overtaking’ by the bus driver, which unfortunately claimed the lives of three male adults.

‘According to an eyewitness account, the bus driver overtook wrongfully without knowing there was a broken-down pick-up vehicle ahead.

‘While trying to dodge the pick-up, he rammed into the tanker and crashed,’ the corps boss explained.

The FRSC rescue team from Nteje Unit Command had swooped into action by rushing the victims to Chira Hospital, Awkuzu, where the bus driver was later confirmed dead.

The Eastern Updates gathered his body has since been deposited at a mortuary in Awkuzu.

The sector commander said that officials of the FRSC were on high alert to manage the traffic and also ensure the obstruction caused by the crash was cleared.

The FRSC, while sympathising with the family of the dead, urged motorists to refrain from wrongful overtaking, and be vigilant while driving.

The Eastern Updates reports that a very good number of road accidents yearly in Nigeria are usually due to over speeding by careless drivers.