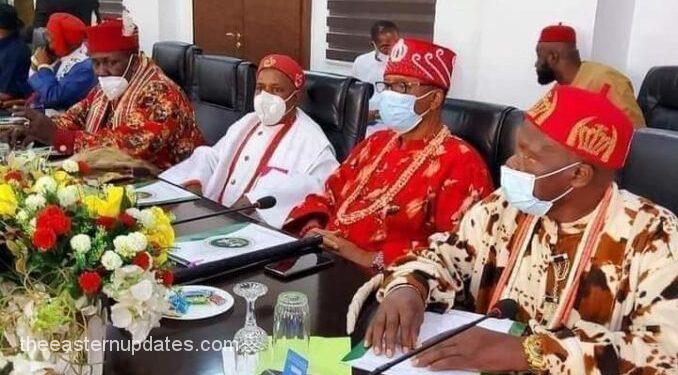 The Joint Body of South East Council of Traditional Rulers and Representatives of Igbo Archbishops and Bishops has lambasted the Federal Government as well as State Governors over their seeming lack of commitment in arresting the insecurity currently bedeviling in the region.

Arising from its meeting in Enugu at the weekend, the group regretted that both the Presidency and the South East Governors had ignored their requests for meetings to find lasting solutions to the festering issue of insecurity in the zone.

In a communique issued Monday, March 7, 2022 which was made available to The Eastern Updates, the monarchs and religious leaders recalled how their intervention in the build-up to the November 6, 2021 Anambra Governorship Election paid off, leading to the de-escalation of tension and peaceful conduct of the poll.

Some other signatories include the Methodist Bishop of Umuahia, Most Rev. Dr. Chibuzor Opoko, the Catholic Archbishop of Onitsha, Most Rev. Dr. Valarian Okeke, Bishop Obi Onubogu and Igwe Lawrence Agubuzu.

They noted that their achievement was a product of extensive behind-the-scene consultations with all relevant stakeholders including the Indigenous People of Biafra (IPOB).

The traditional and religious leaders said: ‘The response to the appeal by political actors in committing to a peaceful election, as well as by IPOB in cancelling its seven-day sit-at-home order, paved the way for peaceful Governorship Election in Anambra State. The Joint Body wishes to thank all stakeholders for the respect accorded to it in this regard.

‘In a bid to sustain the momentum gained, on November 3, 2021, the Joint Body wrote a letter to the President, Commander-in-Chief of the Armed Forces of Nigeria, His Excellency, Muhammadu Buhari (GCFR), requesting an audience.

‘The purpose of the request was to dialogue and explore avenues for peace-building, douse the tension in the South East to ensure it does not result in grave socio-economic burden on our people. The joint Body fears that further delay or inaction on this request may have the unintended consequence of giving credence, albeit erroneously, to the belief by some groups in the region that restoring peace and stability is not the primary goal of the Federal Government.

‘In the same vein, genuine efforts made through the Chairman, South East Governors’ Forum to dialogue with South East Governors have so far also met a brickwall. Taken
together, the shuttered silence gives room for suspicion and presents ominous portends
if left unattended to.

‘The Joint Body is not unmindful of widely reported visit of a group led by the elder statesman, Pa Mbazulike Amechi. However, the absence of any discernible genuine
effort at peace building as well as the silence of the Presidency on our request for constructive engagement would further seem to give credence to the suspicion in some quarters of a clear lack of strong commitment to peace building and resolution of
security challenges in the South East.

‘It has been three months since the letter was written and delivered to the office of the President. The Presidency has neither acknowledged receipt nor responded to the letter.

‘It is puzzling that the President and the South East Governors appear to be ignoring the demonstrated value of dialogue and consensus-building in finding a lasting solution to the region’s security issues. As leaders who are continuously required by our burden of service to interface with the populace, the Joint Body is desirous of confirming the sincerity and commitment of the Federal Government, in particular, to finding a lasting solution to the security crisis.

‘In anticipation of audience with the Federal and State Governments, however, the Joint Body has continued fastidiously with its engagement with stakeholders across the dimensions of the conflict and ensuing insecurity, a rigorous fact-finding and data gathering exercises, and bridge-building through dialogue and moral suasion.

‘The Joint Body urges the President and State Governors to grant audience as requested so that all hands can be on deck towards restoring peace and security in the
region while improving the welfare of its citizenry.’

It remains uncertain if the leaders would be getting the opportunity to meet Mr President soon.