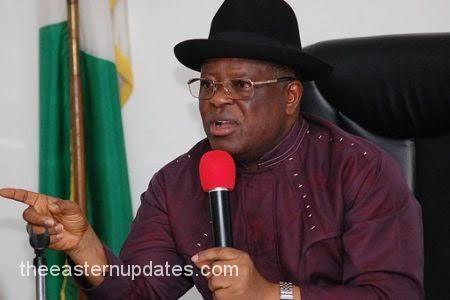 The Ohanaeze Youth Council (OYC), has berated Ebonyi State Governor, David Umahi over his claims of interfacing with President Muhammadu Buhari towards adopting a political solution for the release of detained leader of the Indigenous Peoples of Biafra (IPOB), Nnamdi Kanu.

The Eastern Updates had on Thursday reported that Governor Umahi had assured Igbos that the detained leader of the outlawed indigenous peoples of Biafra (IPOB), Mazi Nnamdi Kanu will soon be released from DSS detention.

Umahi has made the assertion in Abakaliki, Ebonyi State, claiming he initiated a political dialogue with President Muhammadu Buhari to ensure the immediate release of Nnamdi Kanu from DSS detention.

But reacting, the Ohanaeze Youth Council led by Igboayaka O. Igboayaka as National President, in a press statement issued to DAILY POST on Friday, warned Governor Umahi to desist from spreading falsehood and beguiling the unsuspecting public.

The Ohanaeze youths also cautioned the Ebonyi Governor to refrain from engaging in cheap political credit to himself, insisting that the political solution being asked the federal government to adopt in resolving Kanu’s case was initiated by President General of Ohanaeze Ndigbo, Professor George Obiozor and other eminent Igbo sons.

‘Governor David Umahi might be looking for a soft landing to appeal to Ndigbo and IPOB over reckless treatment coated with executive impunity as Ebonyi State Governor. And coming out suddenly to score a cheap political goal in the release of Nnamdi Kanu is very untrue and childish.

‘Those at the helm of affairs of a political solution to Nnamdi Kanu’s case have not taken it to the media space, they are engaging in a lasting solution to the crisis that has erupted in the country for over seven years of IPOB’s struggle for self-determination. Unfortunately, on June 19, 2021, in Enugu State, the same Governor David Umahi chaired a meeting wherein IPOB was publicly rejected by those who claimed to be Igbo leaders.

‘Governor David Umahi ought to know that all his discriminatory communique signed by him against Nnamdi Kanu and IPOB are in our archive and in the book of remembrance. The claim by Ebonyi Governor of interfacing to release of Nnamdi Kanu at Abakaliki on Tuesday, March 1, 2022, has summarized the Igbo adage, ‘Nwoke luchaa ogu, nwanyi enwere akuko”. Therefore, Umahi should look for something else through which he can gain favour from Ndigbo and not to lay claims to glory of Kanu’s release process’, OYC posited.

The Igbo socio-cultural umbrella insisted that Professor George Obiozor deserved all accolades as could emanate from the ongoing processes of releasing the freedom agitator.

‘I can authentically and authoritatively inform our people that every strategic and tactical effort has been made on the release of Nnamdi Kanu by Obiozor without any political interest but basically on his personal conviction as a true Igbo man and his constitutional duty as the number one citizen of the Igbo nation’, OYC added.

The Ohanaeze youth body also called on Igbo youths all over the world not to take Umahi’s self-appraisal to heart and also appealed to them to remain calm and peaceful, to enable those concerned procure a lasting political solution to Kanu’s case.