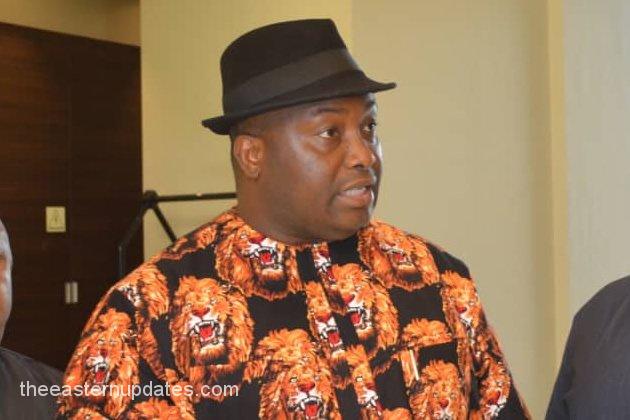 A Federal High Court sitting in Lagos has fixed May 24, for the arraignment of the Senator representing Anambra South constituency in the National Assembly, Ifeanyi Ubah and his firm Capital Oil and Gas Industries in connection with a disputed ₦135 billion debt.

Justice Nicholas Oweibo fixed the date following a consensus between the prosecutor, the Asset Management Corporation of Nigeria (AMCON) and the defendant’s counsel.

Justice Oweibo also granted an application directing AMCON to either paste the eight-count charge it filed against the lawmaker and his firm at his residence or serve him via the Clerk of the National Assembly.

The court made the order after the prosecutor submitted that it had been difficult to personally serve Uba a copy of the charge, making it necessary to serve him via substituted means.

The Eastern Updates gathered that the charge would now replace AMCON’s initial four counts against the lawmaker.

In the amended charge, AMCON alleged that Uba and his firm between 2012 and 2018, conspired to make false claims in relation to the actual values of certain assets transferred to AMCON under a consent judgement he and his firm made with AMCON.

Uba and his firm were also alleged to have obstructed AMCON from implementing the AMCON Act in realisation of part of his alleged outstanding debt of N135Billion by frustrating the sale of property at Banana Island, Lagos.

Counts five, six and seven of the charge read: ‘That you, Ifeanyi Patrick Ubah and Capital Oil and Gas Industries Limited sometimes between 2018 and 2019 in Nigeria, did fraudulently convert the loan given to Capital Oil and Gas Industries Limited (the company) and the proceeds derived from under a direction that same be invested in the company’s business to funding campaign for the election of you, Ifeanyi Patrick Ubah, into the Anambra South Senatorial District seat of the Senate of the Federal Republic of Nigeria in 2018 – 2019, and which act is contrary to Section 383(2) and punishable under Section 390 both of the Criminal Code Act, Cap C38 of the Laws of the Federation of Nigeria.

‘That you, Ifeanyi Patrick Ubah and Capital Oil and Gas Industries Limited sometime between 2011 and 2019 in Nigeria and within the jurisdiction of this honourable Court, being mortgagors of properties listed In the Consent Judgment of this honourable Court in Suit No. FHC/L/CS/714/2012 – AMCON V. Capital Oil and Gas Industries Limited & Mr. Ifeanyl Patrick Ubah, with intent to induce Asset Management Corporation of Nigeria (AMCON) to accept the title offered with respect to the said properties and with the intention to defraud, concealed from the said AMCON instruments material to titles to the said properties which you subsequently failed to produce and thereby committed an offence contrary to Section 423 of the Criminal Code Act and punishable under the same section of the Act.

‘That you Ifeanyi Patrick Ubah and Capital Oil and Gas industries between 2011 and 2019 in Nigeria, being mortgagors of properties listed in the consent judgement of this honourable court in FHC/L/CS/714/2012 -AMCON V. Capital Oil and Gas Industries Limited & Mr Ifeanyi Patrick Ubah, at the time of negotiating the said consent judgement, with intent to defraud and induce AMCON to accept the titles offered with respect to the properties, made false statements and concealed from the said AMCON existing mortgages and incumbrances already created in favour of Aso savings & Loan Limited in respect of the property which later became subject matter in Appeal No.CA/A/468/2016-Aso Savings & Loan & Maharish Nigeria Ltd v AMCON, Capital Oil &Gas Industries & Ifeanyi Ubah and thereby committed an offence contrary to section 423 of the criminal code Act and punishable under the same section of the Act.’

Ubah has on many occasions denied any wrong doing, insisting that he is innocent and the there fall out was a mere ‘policy summersault’.