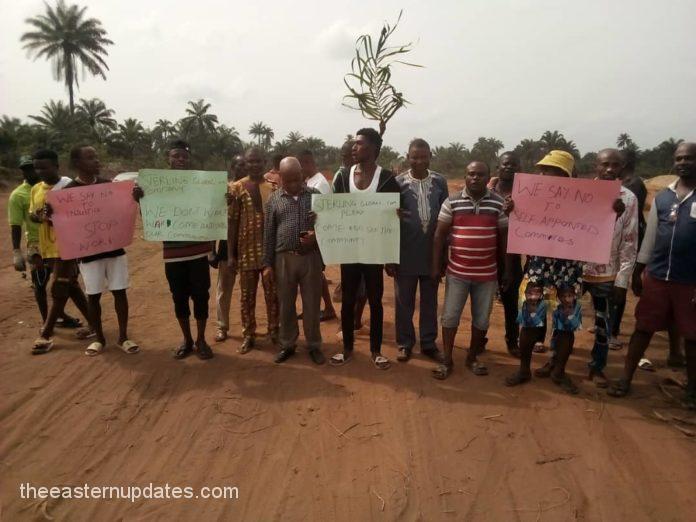 Some groups of Imo youths from Ilile community, in Ohaji-Egbema Council Area, on Tuesday, blocked the main gate of an Imo-based oil company known as Sterling Global Oil Company, demanding compensation for their lands used by the company for oil exploration.

The youths, who sang solidarity songs after blocking the firm’s gate with a bus, said they decided to embark on the peaceful protest in order to stop the alleged injustice against the host community.

They threatened to frustrate the company’s activities until all necessary payments and documentation for the used lands were concluded.

Addressing newsmen, the Ilile Youth President, Mr Chibuike Nzekwe, chided the company for starting exploration and other activities without due consultation with land owners.

He also decried the activities of some persons in the community whom he accused of collecting money from the management of the company without proper documentation adding that such monies remained unaccounted for.

‘The community is not aware of any payment, agreement, documentation or terms of operation in this regard.

‘We want the company to invite us for proper negotiation or produce evidence of compensation for the lands which they are using because that is the only way to ensure that peace reigns’, he said.

President-General of the community, Athanasius Nwagbara, while speaking, urged the company to interface directly with owners of the lands rather than merely through the leadership of the community so as to ensure transparency.

Also speaking, one of the land owners, Mr Prince Ekezie, said that he returned home to notice that his land had been cleared and converted to an access road to the company without his knowledge.

Ekezie, who urged the youths to remain civil, also advised the company to tow the path of peace ‘as a matter of necessity’ by convening a meeting with the community and all aggrieved land owners.

‘Both food and cash crops such as cassava and palm trees were bulldozed without due compensation. This is condemnable’, he said.

Reacting, the company’s Community Liaison Officer, who chose simply to be identified as Jideofor, said that the process of acquiring the lands started four years ago when the company’s representatives met with the leadership of the community.