HomeFeatures5 Injured As Truck Crashes Into Vehicles In Onitsha
Features

5 Injured As Truck Crashes Into Vehicles In Onitsha 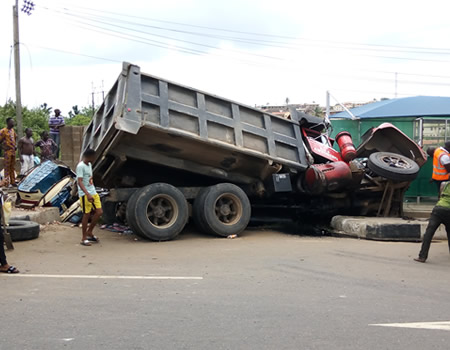 No fewer than five persons, including two women on Thursday, sustained varying degrees of injuries in a multiple auto crash in Onitsha, Anambra State.

The Eastern Updates gathered that the crash which occurred around 12.30pm reportedly involved six vehicles with sixteen passengers on board.

An eyewitness who spoke to newsmen narrated that the trailer driver lost control as a result of excessive speed and crushed the other vehicles in front of him.

He said the driver, however, escaped immediately after the crash.

‘Other vehicles were two Toyota cars and one tricycle without registration numbers.

‘The injured victims were taken to an undisclosed hospital before the arrival of FRSC rescue team. However, the affected vehicles were successfully moved out of the road to allow for free flow of traffic by FRSC rescue team from Upper Iweka Outpost, Onitsha, ‘ he said.