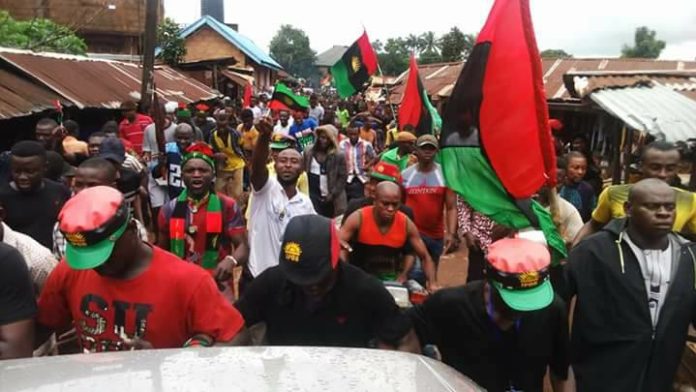 The Indigenous People of Biafra (IPOB), has reiterated that its Monday’s sit-at-home order remains cancelled, while also calling for the enforcers of such orders.

IPOB’s spokesman, Emma Powerful, declared that anyone found to be enforcing the sit-at-home order across the Southeast is an agent of the Department of State Services (DSS) and should not be spared.

Powerful called on the people of the Southeast to go about their normal businesses, adding that anyone caught enforcing the order would be treated as an enemy of the region.

In a statement he issued on Thursday which was sighted by The Eastern Updates, Powerful said: ‘We the global movement and family of the Indigenous People of Biafra (IPOB) ably led by our prophet and liberator Mazi Nnamdi Kanu wish to reiterate once again that IPOB has cancelled the Monday sit-at-home order and anybody or group enforcing the relaxed order is neither from IPOB nor from IPOB volunteer groups.

‘We are advising our people to ignore anybody enforcing non-existent Monday sit-at-home order and go about their normal business because such person(s) are working for our enemies and their intention is to blackmail IPOB and set the movement against the people but they won’t succeed. Anyone caught adding to the pain of our people in the name of enforcing Monday’s sit-at-home order will be treated as the enemy that he or she is.

‘We, therefore, warn these agents of darkness using the name of IPOB to enforce a non-existent sit-at-home to desist because if we lay hold on them they will eternally regret their evil actions. Why should such unpatriotic elements be inflicting pain on our people and dragging our image to the mud? IPOB remains a non-violent movement and our peaceful approach for Biafra restoration has not changed.

‘It will be recalled that IPOB leadership called for the Monday Sit-At-Home and the same IPOB leadership has cancelled it. Nobody has the power to enforce the same suspended sit-at-home using the name of IPOB. Such a person is an impostor working for the killing squad of the Nigerian DSS and Nigerian security agencies and should be treated as such if apprehended. The only day sit-at-home will be observed in Biafra land is when our leader Mazi Nnamdi Kanu is appearing in court, and we shall, as usual, make it public for all to know.’

‘We hereby direct community leaders, market leaders, church leaders, and other institutions of authority in Biafra land to arrest any hoodlum trying to enforce any sit-at-home on Mondays and hand them over to IPOB. Such criminal elements must be treated in a language they understand,‘ the statement added.

IPOB had instituted the Monday sit-at-home order to prevail on the Nigerian Government to release its leader, Nnamdi Kanu.

However, the group had cancelled the order ahead of the just concluded Anambra State governorship election, after it was hijacked by hoodlums.