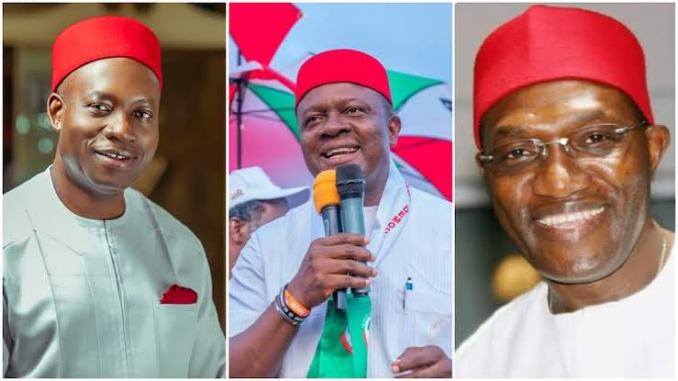 As results continue to trickle in from several polling units across Anambra State, the All Progressives Grand Alliance (APGA) is currently in an early lead.

The Eastern Updates reports that results already collated from various polling units in the state showed that the ruling party is ahead of other tough contenders including the All Progressives Congress (APC), and the Peoples Democratic Party (PDP).

It was observed that as of 12 am on Sunday morning, most wards in Awka South, Awka North, Aguata, Anambra West, Njikoka, and other local governments had completed their election with Soludo of APGA leading in most of the polling units.

Live results collated by The Eastern Updates so far has Soludo of APGA leading with 26082 votes, followed by PDP’s Ozigbo, with 14984 and APC’s Uba polling 14949.

But INEC has announced the continuation of the exercise today (Sunday) due to unavoidable delay experienced during the exercise on Saturday.

Meanwhile, hoodlums disrupted the exercise in some communities as election materials meant for over 57 polling units were allegedly snatched.

Oba 1 and 2 wards, RAs, Idemili South Local Government Area were affected by the activities of the hoodlums.

According to him, ‘Part of the report we got regarding our deployment in different polling units — we were not able to finish deployment in some polling units because of several reasons. One of the reasons is, we were prevented by community members in some local government areas from deploying.

‘So, we have some resistance in these places. While election materials were snatched and destroyed in some other places. Example is Oba 1 & 2 wards, RAs, Idemili South LGA where materials up to 57 polling units were snatched.’