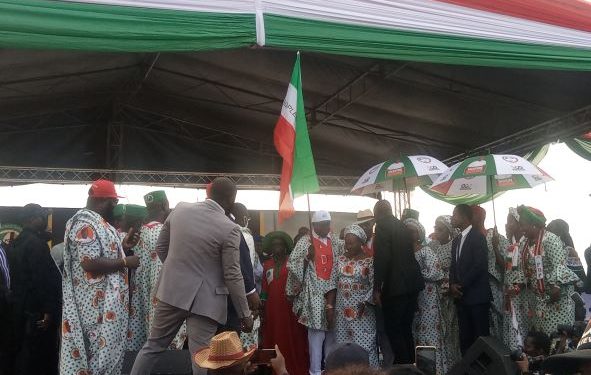 The Governors of Abia, Delta, and Oyo States, Okezie Ikpeazu, Ifeanyi Okowa and Seyi Makinde respectively on Tuesday, joined the Anambra State governorship candidate of the Peoples Democratic Party (PDP) in a grand rally, ahead of Saturday’s governorship election.

Ikpeazu, who is also the Chairman of Valentine Ozigbo national campaign Council, led other governors to appeal to Anambra voters to vote Ozigbo, insisting they will work to ensure he emerged as governor.

Ikpeazu described Anambra people as being among the creme of the country, but frowned at them for being in an alternative political party, saying the creme of Nigeria cannot be at the backwards urging them to come into mainstream politics by voting in a PDP government.

Speaking at the rally, the Governor of Delta State Ifeanyi Okowa stated the recently conducted national convention of PDP which produced new leaders of the party had sent clear signal that the party was ready to take back Nigeria.

Read Also: I Have Defeated Godfathers In Court, I Have None Now – Ozigbo

Okowa urged the the people to be courageous and take back what belonged to them.

For Governor Seyi Makinde of Oyo State, Saturday’s election is a choice for the best.

He said that for Anambra, this was the time to bind together and youths must take the front seat to elect their governor.

They pledged to support the candidate to ensure the liberation of the people of Anambra State.

Obi in his address said: ‘We urge the voters to take back their state because it has collapsed. The state has remained where I left it with roads and other amenities for eight years now, and infrastructures have gravely depreciated, while the state owes more than N120billion in debt.

‘The television debate in which Ozigbo and two others participated on Monday showed clearly that Ozigbo is ahead of others and should be given a chance to uplift the State.’

Ozigbo, who was presented the flag of the party, pledged to implement his manifesto if elected into office.

He said the rate at which supporters of other political parties are decamping to PDP is a sign of what to come.

‘Everyone in the state is angry and wants something new. I will give Anambra a new life if I become governor,’ he promised.