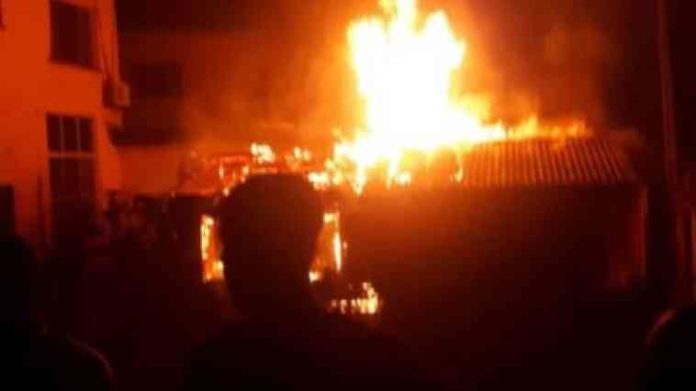 Two buildings on the same street were gutted by fire in Owerri, the Imo State capital within the space of one week.

The Eastern Updates gathered that the incidents occurred at no 1 and 9, Eke-Ada Street on Saturday and Sunday respectively.

According to sources, the fire incident was triggered by an electrical surge shortly after power was restored.

It was also gathered that valuable properties worth millions of naira were destroyed in another inferno that completely razed the first floor of the No 1 building on the same street during the incident between 12 am to 12:30 am on Saturday.

The Assistant Superintendent of Fire, ASF 1, Federal Fire Service, Owerri, Okafor Okorie who spoke to newsmen on the development on Sunday stated that the agency received distress calls and activated its response plan.

He said, ‘On arrival, the Federal Fire Service discovered a storey building engulfed in flames but quickly intervened.’

Okorie said that the fire incident at No 1 Eke-Ada, which was suspected to have been triggered by an electrical surge affected only one flat on the first floor.

He said the Fire Service emergency responders team came within five minutes and prevented the fire from escalating to other flats.

Okorie explained that the quick response of the fire service team effectively stopped the fire from extending to other properties around it. He added that fortunately, no loss of life and no injuries were recorded.

The Eastern Updates gathered that the occupants of the said flat lost all property because they had all gone to church for Sunday service before the fire outbreak.