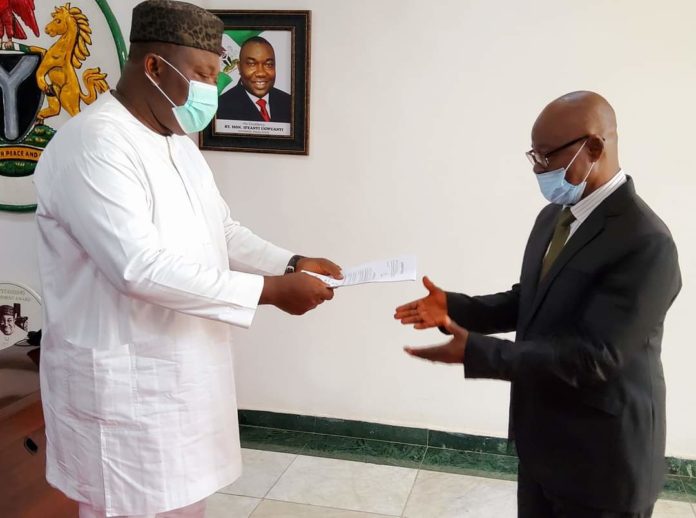 This decision came following the retirement of Hon. Justice Ngozi Priscilla Emehelu, the immediate past Chief Judge of Enugu State, from the service of the State Judiciary on September 7, 2021.

Swearing in Hon. Justice Ozoemena as the acting Chief Judge, Gov. Ugwuanyi explained that the decision was based on the order of seniority of the Judges of Enugu High Court as confirmed by the National Judicial Council (NJC) via its letter Ref. No. NJC/S.14/HC.EN/9/1/228 dated September 1, 2021.

The governor explained that the 1999 Constitution of Nigeria, as amended, did not contemplate that vacancy should exist in the office of the Chief Judge of a State given the sensitivity of the office and its functions.

He added that section 271 sub-section 4 of the Constitution empowers the Governor of a State to appoint the most senior Judge of the High Court to perform the functions of a Chief Judge of a State if a vacancy occurs in the position until a person has been appointed to and has assumed the functions of that office.

Gov. Ugwuanyi, therefore, congratulated Hon. Justice Ozoemena for his well-deserved appointment as the acting Chief Judge of Enugu State, expressing confidence that he will bring his juristic erudition, diverse experience, and gravitas to bear on the administration of the Enugu State Judiciary.

According to the governor, ‘I wish you well and pray for God to grant you the strength and wisdom to discharge this herculean duty’.

Responding, Hon. Justice Ozoemena thanked God for making it possible for him to be sworn in as acting Chief Judge of Enugu State and appreciated Gov. Ugwuanyi, who he said he holds in high esteem, for his elevation.

The acting Chief Judge paid glowing tributes to the retired Chief Judge, Hon. Justice Emehelu, for the quality leadership she provided in the State Judiciary and promised to keep all the worthy legacies she left behind as well as improve on them.