Ugwuanyi Hands Over Two Rebuilt Mosques To Muslims In Nsukka 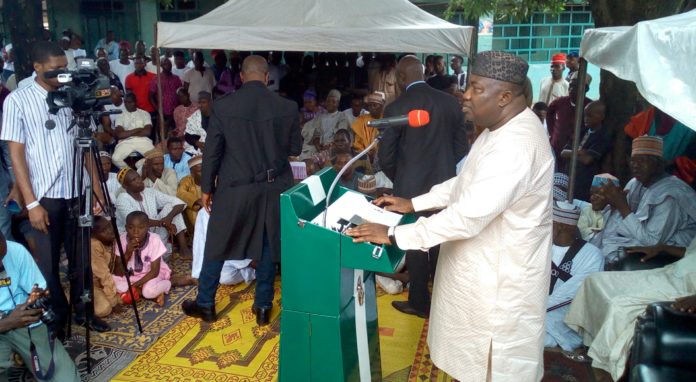 Enugu State Governor, Ifeanyi Ugwuanyi has formally handed over to the Muslim community in Nsukka, two mosques rebuilt by his administration which were hitherto destroyed following a protest that erupted in the area, in October last year.

Following the destruction last year, Gov. Ugwuanyi had directed the immediate rebuilding of the two affected mosques and consequently detailed the council chairman to liaise with the leadership of the Muslim community in Nsukka, to redesign and construct new mosques for them.

Handing over the rebuilt mosques to the Nsukka Muslim community, led by the Chief Imam, Nsukka Central Mosque, Alhaji Yakubu Omeh, on Friday, Gov. Ugwuanyi, represented by the Chairman of Nsukka LGA, Hon. Ugwueze, thanked God that the incident did not lead to any loss of life.

The governor thanked the Christian and Muslim communities for sustaining the existing peace in Enugu State, reassuring them of his commitment to continue to protect everybody resident in the state.

In a message of appreciation presented by Prof. Momoh Mumuni, the Muslims expressed their profound gratitude to Gov. Ugwuanyi for the rebuilding and inauguration of the mosques, stressing that the governor has ‘shown high level of compassion, tolerance, resilience, dedication, commitment, bridge-building spirit; and has exhibited sincere passion for which we have known you since your days; and harbor no grudges against anybody living in your domain’.

They said that the governor is ‘more of a father, brother, mentor and bridge-builder to us in Enugu State’, adding that “you (Ugwuanyi) have demonstrated unparalleled record for your kind gesture, by quickly putting together and deploying all your arsenal, energy, strategies and dragnets to ensure the avoidable crises that led to the miscarriage of annoyance to our worship place (mosque) did not reach the point of no-return”.

In his remarks, the Chief Imam, Nsukka Central Mosque, Alhaji Omeh, also thanked God that nobody died during the protest and lauded Gov. Ugwuanyi for his prompt and rare intervention.