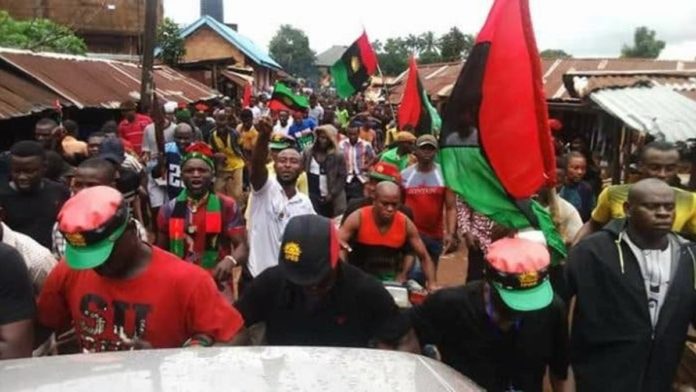 The apex Igbo socio-cultural organization, Ohanaeze Ndigbo, has again appealed to the Indigenous People of Biafra, IPOB, to reconsider its sit-at-home protest, expected to hold every Monday starting from this month of August.

Next Monday, August 9, has been declared by the IPOB as the first day the order would take effect until Mazi Nnamdi Kanu is released.

However, speaking on Friday, Ohanaeze in a statement by its Secretary-General, Mazi Okechukwu Isiguzoro urged the agitators to shelve the order.

He also demanded the unconditional release of the IPOB leader.

Read Also: Ohanaeze Ndigbo Opens Up On Failure Of DSS To Produce Kanu

He said Kanu’s freedom would ‘avert possible breakdown of law and order across the country, as his continuous incarceration will attract grave consequences on Nigeria and the Nigerian Government.’

He added that, ‘the sit-at-home declaration aimed at pressurizing the Nigerian Authorities to release Nnamdi Kanu will destroy the backstage activities and efforts of Igbo leaders and politicians who are using diplomatic means to get him released.

‘There’s hunger and hardship in Southeastern Nigeria. In the past sit-at-home, there were economic losses, destruction of properties, and hikes in prices of food and essential materials across Southeastern Nigeria, and Igbos painstakingly endured untold hardship and this must not continue’.

‘IPOB should review their stance and unveil more strategic planning with Southern Nigeria Governors and legislators to press for Nnamdi Kanu’s release without hurting or subjecting the people to sorrow, affliction and despair.’

He appealed that the people should be allowed to go on their normal businesses on Monday.