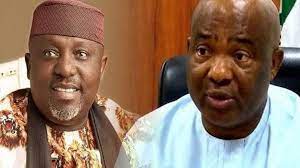 Imo State Governor, Hope Uzodimma, and former governor of the State, Rochas Okorocha may have reignited their brawl over who owns the Eastern Palm University located at Ogboko in Ideato South Local Government Area of the State.

The Eastern Updates gathered that despite the fact that the State government has announced the resumption date of the school while instructing the students and staff to resume from July, 5 following the renaming of the school to Kingsley Ozumba Mbadiwe University, Okorocha has continued to insist that the school belonged to him.

Okorocha in a statement by his media adviser, Sam Onwuemeodo has reaffirmed that the school was a property of the Rochas Foundation and thus challenged Uzodimma that the name of the school, which he said has a legal status, can not be changed with a resolution at a Cabinet meeting of the governor.

The State government has since moved in to remove and change the billboard of the school, bearing its former name replacing it with its new name while a new Vice-Chancellor was also appointed.

But Okorocha not letting go has said that the State government has no right to change the name of the school.

‘The Imo State Government, has been making some baseless and unsubstantiated claims, over the University to the extent of claiming that, it has changed its nomenclature to Kingsley Ozumba Mbadiwe University.’ Okorocha said.

Okorocha has also accused the State government of not being patient to allow the matter be decided at the court before its recovery of the school from his foundation.

‘The Cases concerning the fate of the University, have been going on in Courts of Competent Jurisdiction. And that the University is also one of the items being investigated by the EFCC.

‘The Imo State government was also expected to toe the path of peace and Civility, by stopping further encroachment on the University and further inflammatory actions and utterances, until the Courts decide on the fate of the University. And the EFCC also making public, the outcome of its investigation on the University.’ Okorocha explained.

The senator representing Imo west has attributed the State government action especially the recent closure of his radio station ‘Reach Fm’ to personal vendetta against him.

‘The truth is that, the Imo State government has nothing tenable to back its claim over the University. That is why they are going by fiat or self-help. And one can clearly see evidences of hate, vendetta, and envy in the whole drama.‘ Okorocha submitted.