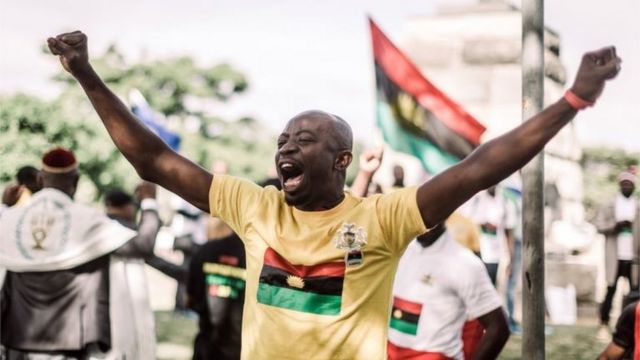 The Abia State Police Command, on Monday, revealed that some individuals or groups of persons are currently planning to stage protests in the state.

The Eastern Updates reports that there have been indications that some supporters of Mazi Nnamdi Kanu, the detained leader of the Indigenous People of Biafra, IPOB have vowed to stage protests in some parts of the Southeastern region particularly the Abia State.

Kanu, who is a native of Abia, was recently rearrested from an undisclosed country to return to Nigeria and continue his trial.

The fugitive who is a dual citizen of British and Nigeria is currently detained by the Department of State Services, DSS.

Reacting to the planned protest, the police command, in a state-issued by its spokesman, SP Geoffrey Igbonna urged the intending protesters to desist from it owing to the current level of insecurity in the state.

The statement reads, ‘Intelligence at the disposal of Abia State Police Command has it that individuals or groups of persons are planning to lead protests of any kind in the State.

‘In view of the Security Situation in the Country especially in the South East Geo-Political Zone, the Commissioner of Police Abia State Command wishes to advise intending protesters to desist or postpone such exercise forth-with.

‘This has become necessary as hoodlums or miscreants may hijack the process to unleash mayhem on the lives and property of innocent citizens.

‘The Security Operatives in the State have been placed on red alert as the Command will not tolerate any act capable of truncating the peace in the state’.