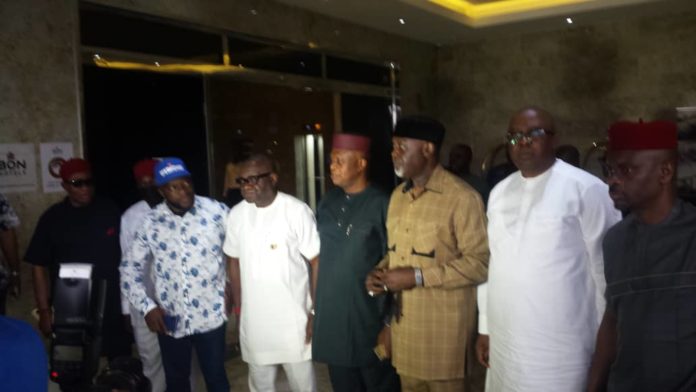 At least 10 governorship aspirants of the All Progressives Congress (APC) in Anambra State, have reiterated their rejection of the result of Saturday’s primary election, which produced Sen. Andy Uba as winner.

The aspirants, who briefed journalists in Awka after a closed-door meeting, said no election held in the state on Saturday, while also describing the election result published by the Ogun State governor, Prince Dapo Abiodun as ‘Facebook result’.

One of the aspirants, Dr George Muoghalu, who spoke on behalf of others said: ‘There was no election in Anambra State on Saturday. Opportunity was not provided for our people to choose who they desire to represent them in the forthcoming election.

‘Whatever you do in the primary election has a way of affecting the main election, and with what happened on Saturday, we are not sure what we are heading for.

‘You all will agree with me that we have been here in the last six months building support bases in the state and meeting our party members, and at the end, election did not hold. They started distribution at over 3pm and in some places 6pm, and you know what that means because arrangements for electricity and security was not made, so how will people comene out to vote.

‘The result Governor Abiodun announced is Facebook result. We are asking for free fair and credible primary, but if it must be by consensus, then it must be with our agreement, not imposing someone on us. We are going to report to the president, he needs to know that there was no election in the state.

‘There will be consequences if the NEC of our party refuses to listen to us. Election did not take place anywhere in Anambra except Governor Dapo Abiodun wants to tell us that the election was held in someone bedroom,’ Moughalu said.