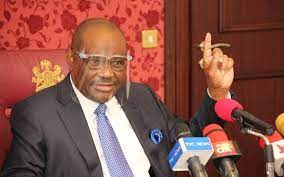 The governor spoke on Monday evening while featuring on Channels Television’s ‘Politics Today’ programme monitored by The Eastern Updates.

The Eastern Updates had gathered that commercial activities came to a standstill on Monday in Imo, Anambra, Enugu, Abia, and Ebonyi States as residents deserted public places in compliance with IPOB’s sit-at-home order.

IPOB, through its Director of Media and Publicity, Emma Powerful, had said human and vehicular movement would be restricted across the South-East on Monday to mark the 54th anniversary of Biafra.

However, commenting on the development, Wike said, ‘With all due respect, I have said it before and I will continue to say it: IPOB cannot make an order to say sit at home in Rivers State because it (IPOB) does not exist in Rivers State. Rivers State is South-South; we are in (the) Niger Delta.

‘I am not saying whether the people of the South-East should obey IPOB or not but they cannot give order to Rivers people to sit at home. It is not possible.

‘I am not against IPOB’s activities in the South-East; they have a right to whatever they are doing with their people but as far as Rivers State is concerned, you cannot give an order when we are not part of what you are doing. It does not work.’

It may however important to recall that the federal Governemt had in September 2017 outlawed IPOB and declared that the activities of the secessionist group constituted an act of terrorism and illegality.